Thip of the Tongue ♫
A group of blue colored iguanas with yellow eyes are the residents of the Land of Frost and Frogs. They were not initially given a name in-story with only an outside source confirming them to be iguanas, until Myststuck where they were confirmed in-story to be iguanas. They are Jade's consorts, but she did not have any interactions with them. Iguanas were seen so far as part of Rose's complacency, and one of them

, wearing Jade's Green Sun bedsheets, brought Rose a magic cue ball. The spikes on their backs might be related to Jade's Denizen Echidna and her Quills. Otherwise they look quite similar to the salamanders of the Land of Wind and Shade. Their onomatopoeia is "thip" and seems to relate to their rapid tongue movement.

Statues on the Land of Sand and Zephyr suggest that Tavros Nitram's Consorts were iguanas as well. This seems especially likely since identical looking statues were seen in a cave on Land of Frost and Frogs.

Depictions of iguanas can be seen on the wall in Frog Temple, along with the other three consorts of the kid's session.

In Act 6 Intermission 1, an iguana is seen

holding Ahab's Crosshairs, presumably the one Jade alchemized and threw out her window.

On a side note, it seems that only one of the igauna's spines have bone, since only one appears in the skeletal version of the consort. The secondary spine could possibly be made of cartilage or similar material. 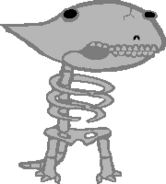 An iguana with a turtle, a salamander, and a crocodile

Wall with consorts' depictions on it
Community content is available under CC-BY-SA unless otherwise noted.
Advertisement