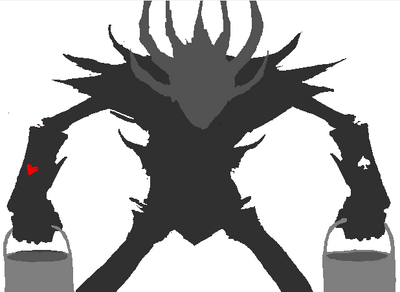 They bring this genetic material to the Mother Grub, who combines it all in an incestuous slurry and lays hundreds of eggs at once - genetic material from stronger bonds of either nature see more representation in the resulting brood, while weaker relationships result in more recessive genetic traits.

We should all take a moment to lament how pedestrian the human reproductive system is, and further lament that the phrase "incestuous slurry"

is not a feature of common parlance in human civilization.

, potentially even being one and the same.

), or the Carpenter Droids who assist young trolls in constructing their Hives.

As trolls are consistently implied to be an alien equivalent to social insects such as ants or bees, complete with their early life metamorphosis, this suggests a specific origin of the Imperial Drones. Trolls would be the fertilized offspring of a Mother Grub while Imperial Drones are the unfertilized offspring - related only to the mother grub. This would mirror how insect queens give birth to drones without being fertilized and workers with being fertilized. However, this is never confirmed in comic, so as aliens, they could be completely different.

During the events of Hiveswap, an additional type of Imperial Drones appear, during the advent of the royal Heiress Trizza Tethis. In addition to being collectors of genetic reproductive material (as shown in Bronya Ursama's Friendsim route), they appear to function more like a military or police force, attacking hives, culling and kidnapping trolls; they function in a manner similar to their robotic counterparts from Post-scratch. Along with this, their bodily features appear to be more robotic than organic, possessing the ability to hover around with rocket boots. This may imply that they are either semi-organic cyborgs or fully artificial robots like their red mechanical Crocker Corp counterparts. These Imperial Drones appears more to be colorful than the kind that simply collect reproductive material. It is uncertain if this is unique to this era of Alternia's history, or if Imperial Drones are normally used for military purposes.

The End of Act 6 Intermission 1

showed a group of Drones with the rebranded Crockercorp logo, which is also the Battleship Condescension logo. They also appear in [S] Jane: Enter

, heading towards the locations of Dirk and Roxy respectively, presumably to attack them.

They were created by the Condesce after she took over Earth and initially were part of her scheme to force the Alternian reproduction system upon humanity. After humans go extinct they serve as a sort of "police" of her twisted regime, patrolling the world in large numbers and carrying out her orders. Unlike their Alternian counterparts they are robotic instead of organic. Dirk states

that this is because on Earth the Condesce was unable to successfully breed things the traditional Alternian way. Like all other Crocker Corp tech they are bright red.

Retrieved from "https://mspaintadventures.fandom.com/wiki/Imperial_Drone?oldid=228137"
Community content is available under CC-BY-SA unless otherwise noted.