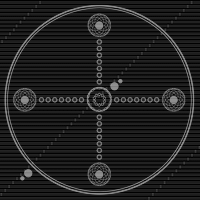 The Medium is the thick of the Incipisphere between the Furthest Ring and Skaia, or more specifically between Skaia and The Veil, to which a player's house is transported to upon entry. Although utilities (such as electricity and Internet connections) appear to be disconnected, the Medium seems to facilitate a working Internet connection (and a power supply, at least to the players' computers) wherever the player is.

Most Sburb sessions provide planets for their players, one for each player to be transported to upon entry; for example, in the B1 kids' session, there are four planets in their Medium. Each planet is separated from Skaia by seven gates, each of which is found somewhere on its surface. Each planet has its own unique environment and (usually) has some form of civilization (long deceased or otherwise) maintained by different species of consorts.

Upon arrival to the Medium, the kernel of the kernelsprite divides and the prototyped attributes are sent to the Light and Dark spires upon Prospit and Derse respectively. Derse then sends underlings and monsters (initially imps and ogres) to the player's planet to harass the player. These underlings (and eventually, monsters) initially take on the constituency of the materials and elements that make up the player's respective planets, but also take on the characteristics of the prototyping. For example, John's imps were initially made up of Shale and Tar (among others), due to his planet's oily constituency, and wore clowns' clothing, as per his prototyped kernelsprite.

In the B1 kids' session, a planet's theme includes elements suited to each player's Mythological Role. For example, as the Heir of Breath, John Egbert's planet is the Land of Wind and Shade, while as the Seer of Light Rose Lalonde's planet was the Land of Light and Rain. The troll's session seems to follow the same pattern sometimes with frequent deviance. For instance Eridan Ampora as Prince of Hope, an aspect associated with faith and power, sired the Land of Wrath and Angels while Nepeta Leijon sired the Land of Little Cubes and Tea. It is noted that neither Tea, nor sugar cubes, are shown to be associated with the Heart aspect anywhere else in all of Andrew Hussie's works.

The B2 kids' planets seem to follow a different convention, possibly due to the special nature of their session; their planets' traits consist of a place of interment and a noble gas respectively (such as the Land of Tombs and Krypton). The specific significance of the planets' traits to their player is yet to be confirmed.

There are a few quirks to the naming and theme of the planet; for example, as far as we can tell all Space players will have Frogs as their planet's latter trait (Jade's Land of Frost and Frogs and Kanaya's Land of Rays and Frogs). This is linked to the Space player's planet being the one that facilitates frog breeding. Similarly, every Time player's planet features a construct used to facilitate the scratch.

It would seem every planet facilitates a quest for its player, whether or not the player becomes aware of this. John's planet tasked him to free the fireflies trapped by the thick clouds of his planet (put there by his slumbering Denizen) by utilizing his Breath powers, while Dave Strider of the Land of Heat and Clockwork was provided with a stock exchange he could manipulate with his Time powers. It's also implied that Rose's quest (which she deemed irrelevant and didn't bother with) was to find a way to "play the rain" in a way that would somehow bring life to her fishless, barren planet (as riddled by jaspersprite). It's suggested by Dave that a planet provides the quest and inheritance that omnipotence deems each player needs to grow into their roles.

The Dark and Light Kingdoms[]

There are two kingdoms that occupy the Incipisphere whose ongoing war provides the context for the session. Both kingdoms are comprised of a planet with a moon physically connected by a thick chain. The Light Kingdom, called Prospit, orbits near Skaia, with its moon skirting through Skaia as it orbits around Prospit. The Dark Kingdom, called Derse, has its own distant orbit past a Veil of meteors, flirting with the Furthest Ring, a spatially and temporally indeterminate void inhabited by the Horrorterrors that divides each session from each other.

Prospit and Derse each have a number of spires corresponding to the number of players to receive the kernel from the divided kernelsprite upon a player's entry. Each kingdom is a palette swap of the other, with both exhibiting a complex network of Gothic architecture. Similarly, the inhabitants of Prospit bear a white carapace, while the inhabitants of Derse have a black one.

The Veil is a belt of meteors that separates the Medium from the Furthest Ring, with Derse orbiting just beyond it. It comprises many asteroids, many of which are "seeds" that will eventually be sent to destroy (and 'repopulate') the players' home planet. The Veil is treated as neutral ground for the kingdoms and contains laboratories as well as other facilities designed primarily for building the kingdoms' armies. Up until the end of Act 5, the trolls were hidden from Bec Noir in what was remaining in the Veil after the Reckoning had depleted it of most of its asteroids.

Skaia is a "dormant crucible of unlimited creative potential" that lies beyond the Seven Gates, for which the kingdoms of the Dark and Light Kingdoms fight for control over. Prospit tries to protect it, while Derse seeks to destroy it. Across every session, Derse inevitably wins. At the center of Skaia lies The Battlefield where the physical war takes place, led by the Black and White King. This battlefield mutates with each prototyping, expanding exponentially in complexity each prototype (how this worked in the trolls' 12-times prototyped session is not illustrated).

The Furthest Ring is the void that surrounds the furthest edge of the Medium (and presumably, the Incipisphere), beyond the orbit of Derse. It is the home of The Noble Circle of Horrorterrors, who communicate with the Sburb players whose dream selves sleep on Derse's moon. Despite its apparent distance from the edge of the Incipisphere as shown in the diagram to the right, Rose has stated regarding the Furthest Ring that “Derse skirts its edge, and during the lunar eclipse, [Derse dreamers] graze it”"

. It is a vast void of indeterminate space and time that separates all the sessions. Not much has been revealed concerning its inhabitants.

Time and space do not operate properly in The Furthest Ring. Travel through The Furthest Ring can lead back and forth in time, and great mastery of time and/or space is needed to traverse it. The light of The Green Sun can be traced back to its origin and used as a one-way path into The Furthest Ring, if followed quickly enough.