During the course of Homestuck, Jade Harley uses several computing devices to stay in touch with her co-players and the trolls.

The Lunchtop is Jade's laptop computer, contained within a Squiddles lunchbox. The interface of Jade's computer is 3D holographic. Jade's lunchtop was thrown free of her bedroom when it was destroyed.

Kanaya Maryam also owns a Lunchtop, "“branded not with Squiddles but the cuttlefish troll equivalent, presumably called Cuttles.”" However, Kanaya uses the lunchtop with the lid closed. Also of note is the fact that the two keyboards are tinted in their respective text colors.

The communications device used by John in the future uses the Lunchtop's holographic technology, as well as its general shape.

Jade combines the lunchtop with several items during her Alchemization spree post-Medium entry to make a variety of items that are all functional computers. Jade will never be caught without a computer, ever.

See Jade's outfits for how she's paired the accessories with her alchemized clothing.

Later on, John creates a similar device bearing the image of Bill Cosby. It is first seen with him right before he initiates the scratch.

Finally, a difficult to use hands-on computing solution that does nothing but roll around of his own accord while talking about his emotions and reading books fast!

This computer is later destroyed by Eridan after the only time he contacts Jade.

The über-expensive Junior Compu-Sooth Spectagoggles allow Jade to view anything that's going on in the entire Incipisphere. Totally worth it! Plus, you can never have too many cool computers.

A memory copy of these can be found in the chest near Mituna in part 3 of Openbound, implying that Jade has paid at least one visit to the A1 trolls. 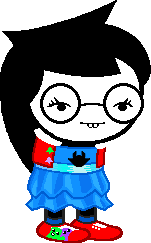 The soft and stylish Squiddlejacket and the matching pair of Squiddlesneaks are BOTH computers. Seriously. You can never have too many computers.

Retrieved from "https://mspaintadventures.fandom.com/wiki/Jade%27s_computers?oldid=240600"
Community content is available under CC-BY-SA unless otherwise noted.