“because, like everything else today, no matter how scary this seems...
in the end, it's only a puzzle.
and solving puzzles is what i do.”

Not specifically confirmed canonically. However, as her primary Strife weapon is her flashlight, it is presumed to be flshlghtkind, or similar.

Joey Claire, Extraordinaire ♫
We Shall Go Together ♫

Joey lives at the Half-Harley Manor just outside the town of Hauntswitch on Earth, in the B1 universe. In 1994, 14 and a half years prior to the beginning of Homestuck, she is playing outside with Jude and Tesseract when a monster attacks them. This forces her to lock herself in her room to escape the creature; however with the help of Jude, she makes her way to the safety of the Manor's attic, where Jude has been keeping a mysterious cherub-themed device. Ignoring Jude's advice to not even get close to The Cherub-Themed Device, Joey proceeds to do it anyway, unlocking the front of the device with the Cherub Key (an heirloom from Joey's late mother, A. Claire.) The Cherub-Themed Device turns out to be a portal which sucks her inside, shooting her to the planet Alternia in the A2 universe. From there she meets a nervous troll by the name of Xefros who wants to help her find her way home, until he is put into a situation where Joey has to save him instead. From there, the two go out in search for a close friend of Xefros, who is a huge fan of the Grubbles that also hates the Heiress in order to find help.

Joey is an intelligent, even-tempered girl with a knack for puzzle-solving. Joey is a dancer, practicing both ballet and tap, which she uses to escape some tricky situations in creative ways. She is also an aspiring veterinarian, and keeps a small kit of medical tools on her person.

Due to her difficult childhood, Joey is deeply frustrated with the adults in her life and sometimes feels insecure due to the neglect she faces. Joey has little tolerance towards bullying and abuse, and will not hesitate to stand up for people she sees as being mistreated.

Although she is constantly confronted by strange events and circumstances, she repeatedly shows herself to be adaptive and creative despite it all. Joey is a survivor that is determined to reach all of her goals.

She shares a tense but loving relationship with her brother Jude Harley, who frequently hassles her with puzzles, pranks, and conspiracy theories. Joey admits to herself that she isn't as close to Jude as she could be due to her insecurities making her resent Jude's clueless self-assurance. However, since they lack in adult supervision, the two rely on each other a lot, and they get along well enough that they work together fairly efficiently during emergencies. They both share of love of animals, but Jude's tastes in animals are slightly more eclectic. Joey involves herself in Jude's internet friend group, but doesn't really consider them as her own friends.

Joey shares a very negative relationship with her neglectful father, who has been home increasingly sparingly since the death of her mother. This tense relationship is further strained by their conflicting interests, with Joey's love of animals and her father's passion for hunting for sport and taxidermy. Joey and her brother spend a great deal of time playfully vandalizing their father's belongings during his regular absences. As an expression for her disdain for her father, Joey uses her mother's last name instead of her father's.

Although a decade deceased, Joey clearly looks up to her mother and aspires to be just like her. She constantly feels her lack of presence and misses her greatly. The Star on her ceiling was painted by Joey and her mother, the same star which she wears as her symbol today.

Joey shares a mostly positive relationship with her babysitter, but acknowledges her problematic alcoholism and that she is a terrible role model. Despite this, she loves her all the same and knows that she is trying her best. She admits to having more positive memories with her than with either of her parents combined.

After being spirited away to Alternia, her sole helper was a burgundy-blooded troll by the name of Xefros Tritoh. Xefros initially believed Joey was actually Dammek, subjecting him to some strange test on the part of his overbearing friend, but eventually realizes that Joey is actually an alien. During his attempt to assist Joey, Xefros is put into a position where Joey is forced to rescue Xefros instead. After hearing about Xefros' troubles, and being inspired by Xefros' willingness to put himself in harm's way to protect a complete stranger and alien, Joey declares that the two of them are good friends and that Xefros is worthy of respect. The two seem to be developing a friendship. During Hiveswap: Act 2, they become closer as Joey helps him gain more confidence in himself, and he becomes very protective of her.

In Hiveswap: Act 2, Marvus helps Joey out multiple times, and is overall very kind and friendly to her. However, upon reaching the purple highblood car, he forces her to play a game in order to pass, where she must kill three trolls from different blood castes. He is still kinder than the other purplebloods and more willing to believe the evidence she brings of her murders than the others, but it is safe to assume that Joey's views of him are now very negative.

Elwurd flirts with Joey every time they talk and offers her various things to help for the right price. Joey doesn't understand her advances, though she does get flustered, but they seem to overall get along despite Elwurd scamming her.

Although she has never met Dammek, Joey does not think highly of him. She thinks of him as little more than a gun-obsessed bully and slob and that Xefros should get a better friend/moirail.

Joey was initially terrified of the beast, but after some research and encouragement from Xefros, Joey quickly befriends Dammek's deercat lusus after feeding it and tending to its wounds. Soon after Joey helps it, the lusus lets Joey ride on its back. Joey names the beast Cornibuster by default, assuming the player does not choose to name it themselves.

Joey does not get along with her classmates. They bully her, and she in return calls them evil and clowns in her diary. She also notes a strange feeling that they simply aren't up to any good.

Joey is very determined to prove that Daraya is innocent in Hiveswap Act 2 and seems to admire her a lot, getting flustered over how cool she is. In the cerulean car, Mallek is very friendly towards Joey and willing to help her out. He also identifies her a mutant and assures her that he's "cool with mutants." 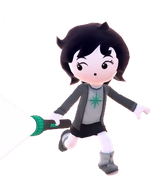 The original 3D model of Joey. 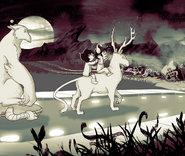 Joey entering a strife with a monster.

Taking a selfie with Xefros

Baby Joey with her mom

Joey as seen in the Hiveswap Act 2 Launch trailer

Joey in Dammek's sweater with no horns

Joey's sprites from the trial