Reterniabound,[1] titled in Homestuck as [S] Kanaya: Return to the core.

is a Flash segment in Act 5 Act 2, posted on 01/22/11, that stars five of the trolls within the lab, with roughly 3 hours and 14 minutes left in the countdown. It is the second part of Alterniabound. 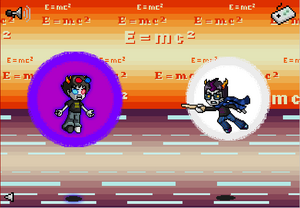 After Terezi Pyrope absconds from the room, the reader/player will be able to control Kanaya or Karkat. Karkat is unwilling (and playing as him, unable) to leave the main room via the transportalizer, and when Kanaya attempts to do so she will be knocked out of the way by Eridan who enters the room. As Karkat, his conversation with Kanaya concerns his frustration with Jade's password system and how his relationship with Jade might be upsetting to Terezi.

Kanaya must return the matriorb to the core, and in order to proceed Kanaya must pick up the matriorb and notify Karkat of where she is going (for not telling her leader would be irresponsible). Karkat says she has to be in the lab with him, but after saying she will be gone for only a few minutes, Karkat lets her go. After doing all of this, she attempts to transportalize, but is knocked out of the way by Eridan.

The reader will then be forced to continue as Eridan, and can end the flash game by talking to Sollux Captor and Feferi Peixes, who are currently resting in the horn pile. Still angry at Sollux after their last duel, he says that as the Prince of Hope, he knows when all hope is lost, and says he will join Jack Noir in hopes of being spared and attempts to get Feferi to go with him. Sollux and Eridan begin round 2 of their duel which ends with them charging energy beams. After the duel, the player is given the option to view the scene again or start over.

None of the other trolls make an appearance.

Doc Scratch has a message waiting for Kanaya. Or rather, he has a message for Karkat, left on Kanaya's computer. It's a pity she doesn't trust him or have any time to highlight it.

Just like in Alterniabound, Trickster Mode allows you to go to the music room, but Sollux is performing a mad hip thrust in the place where Gamzee used to dance. His shitty music taste also results in only one track, Heir Conditioning, being available, much to the disappointment of the EarthBound cast, who, unlike in Alterniabound, can actually be talked to, remarking on where Gamzee went, Sollux's thrusts, and how he only has one record. Heir Conditioning is an arrangement of Utsuho Reiuji's theme, Solar Sect of Mystic Wisdom ~ Nuclear Fusion, and Cirno's theme, Beloved Tomboyish Daughter of the Touhou Project.

Retrieved from "https://mspaintadventures.fandom.com/wiki/Kanaya:_Return_to_the_core?oldid=220667"
Community content is available under CC-BY-SA unless otherwise noted.