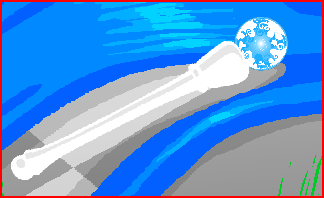 The King's Scepter is a tool that allows the White King and the Black King to be prototyped, much like the Queen's Ring. Unlike the Rings, however, the Scepters also bestow upon their wielder a dramatic increase in size. Each scepter is tipped with a representation of Skaia. The scepter, also similar to the queen's rings, has orbs floating around the base of the tip. The number of orbs is directly correlated with the number of prototypings in a given session (four in the beta kids' Sburb session, 12 in the beta trolls' Sgrub session and zero in the alpha kids' Sburb session).

Flash animation features two scene transitions suggesting that the scepters may, in fact, hold Skaia itself. It is unclear whether this was literal or artistic; however, the former is implied by the flow of lava

into the orb on Jane's fork causing lava to rain down among the clouds.

Recap 2 says the following about the scepters:

“The two kings command their armies from the field. They each have a scepter that serves a similar purpose to the queens' rings. When activated, a scepter causes a king to be a giant, and bear the properties of all the prototypings. A king is able to deactivate a scepter, to hand it off to another so that they will not be affected in that way. When the black king captures the white king's scepter, the Reckoning begins. The Reckoning sends all the meteors in the veil toward Skaia, in stages. First the small ones, then gradually, the bigger ones, over a 24 hour period.”

It's implied that defeating the Black King

or destroying his scepter

causes the Reckoning to end; since the Reckoning (and thus the end of the world) begins when the White King's scepter is captured, this would fit in with the role of kings in Chess, where their capture ends the game.

The White King, like the White Queen, had chosen to abdicate, turning his scepter over to the Parcel Mistress. Unfortunately, the Parcel Mistress lost it, as it was knocked out of her hand by the Hegemonic Brute. The Scepter flew over a waterfall and landed in a riverbed.

The scepter was later retrieved by the Courtyard Droll and handed to Jack Noir. He used it to begin The Reckoning, an act that the Black King would perform upon defeating the white army in a typical Sburb session. It appears that the scepter was discarded (or perhaps destroyed) afterward, as it has not been seen since.

The Black King's Scepter was cut in half by Jack Noir during his assault on the Black King. It is presumably now unusable, but knowing the unpredictable nature of the game this is just a theory. Interestingly, the half held by the Black King had its size reduced back to proper scale, but the half that fell to the ground remained the same size as when it was fully functional.

The White King in the trolls' session is never seen, although it can be assumed that his scepter was taken by the forces of Derse to begin The Reckoning.

The Black King was in possession of his scepter during the trolls' assault on him at the end of their session. Ultimately, with an incredibly lucky roll of the dice, Vriska was able to roll all 8s on her Fluorite Octet, destroying the scepter and winning the battle for the trolls.

Strangely enough, the White King's scepter in the post-scratch session is wielded by the White Queen. It is unknown why this is the case, though it's possibly because the White King remains in his unprototyped chess piece form (as post-scratch session is a Void session). It also seems to have no effect on her size, though that could be because - like the Queen's Ring - it lacks any orbs.

At the moment, the Black King's scepter hasn't been seen in this session, but it is likely the scepter also lacks prototyping orbs.

Lord English has a golden scepter or cane that bears a resemblance to the Kings' Scepters. The scepter resembles a pool cue instead of a chess piece, and the tip of the scepter flashes between multiple colors and an image of the Green Sun. The significance of this is unknown. It also exhibits Weapon/Object Duality by transforming into an assault rifle, with the green sun as a laser scope. This is also shared by Caliborn, who possesses a cane/assault rifle as well, albeit a darker variation.