The Land of Crypts and Helium, abbreviated as LOCAH, is Jane Crocker's planet in the Post-Scratch Medium. It is a desolate planet, devoid of life except for some flowers that seem to be growing from cracks and crevices. All trees on the planet are completely dead. It was once home to the Salamanders, such as those that inhabited the Land of Wind and Shade, but they died long ago in relation to the time that Jane makes her way into the Medium. They were instructed by their Denizen Hemera to stop preparing for Jane's arrival, as it would not come in their lives, and instead build their own graves (the "Crypts"). The "Helium" aspect of the planet comes from the large seed pods that grow into balloon-like objects which are filled with helium and then sent off with hopes that they will reach Skaia. The planet shares themes with the rest of the sessions' planets of burial places and noble gases, representative of the dead end/inert nature of their session. When Jane arrives in the Medium, her house lands on one of the balloons, but it soon sinks into the ground beneath the planet.

The Seed Pods scattered throughout the planet have two purposes. They water the planet in hopes of feeding new life and assisting the dead planet in blossoming again. There is indeed much plant life under the surface of the planet, but it seems to be unable to survive on the surface. Their second purpose, according to legend, allows them to make wishes come true. If a wish is carved into a Seed Pod, and the Seed Pod reaches Skaia, the wish would be made true. In this planet's introduction flash, Jane carves a poorly drawn picture of Jake.

Several tablets are scattered across the planet that prophecize the arrival of Jane, the Maid of Life. They do not call her a "Hero", but rather a "Noble", as Nobles become martyrs or toil in endless futility. They have also prophecized that the light of Hope (Jake) will already have been snuffed out, which is evident in the lanterns the reader uses to navigate through the Act 6 Act 3 flash. The lanterns also prophecize that the Nobles of Heart and Void will also have their lights snuffed out, and that they will not be able to finish their quest to hear the Vast Croak without the arrival of the four gods (John, Rose, Dave, and Jade). By utilizing the lanterns and Lil' Sebastian, Jane travels around the planet collecting skulls of a Salamander, a Turtle, a Crocodile, and an Iguana to unlock the door to a room called the "Maid's palace".

after Aranea uses her powers to awaken him

, then went completely dark again off-screen (probably when his waking self died in the Synchronize flash), then grew extremely bright and exploded

when Dirk was revived. When the alpha kids reached the god tiers, the lantern shrine flashed brightly with all of their colors and then exploded

LOCAH also appears to contain scarab beetles as a totem animal, just as John's planet, the Land of Wind and Shade, contained fireflies and Jade's planet, the Land of Frost and Frogs, contained hummingbirds. These totem animals of John and Jade surrounded them when they died on their Quest Beds and ascended into Godhood. Jane's scarab beetles probably would have surrounded her had she died on her Quest Bed (assuming she has one), and ascended to Godhood; however, as was stated by both Calliope and Caliborn, the Alpha Kids were only able to use their Quest Crypts on Prospit and Derse to ascend.

After Jane enters Trickster Mode, she blasts off from her house and restores half of LOCAH to life.

The planet has suffered serious damage in its collision with LOHAC in the battle between the Condesce and Aranea Serket. What remains is currently in Derse's previous orbit.

A view of Jane's home from the air. 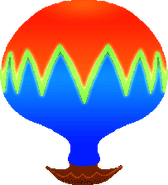 The balloon that Jane's home rests on.

The Land of Crypts and Helium title.