The Land of Frost and Frogs, abbreviated as LOFAF, is Jade Harley's planet in the Medium.

The portion of Jade's island that was transported to The Medium (including the Forge) is connected to a larger land mass. The Land of Frost and Frogs corresponds to the fourth planet in Can Town. 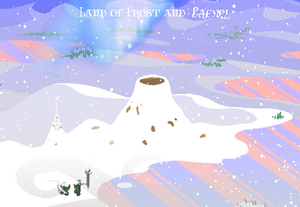 The planet was constantly snowing, and the trees and earth have all frosted over under a white blanket of snow. Pink hummingbirds search for nectar in frozen red flowers, while frogs may be seen encased in thick ice. The sky is covered with beautiful blue and green neon auroras. It is possible that the frost was caused by Jade's denizen, as the animals inhabiting the planet do not appear to be indigenous to cold climates.

The consorts inhabiting the planet appear to be blue Iguanas. The denizen of the planet is Echidna, whose quills are essential for activating the scratch. Underlings, such as Becquerel-prototyped Uranium Imps, have invaded the planet.

Jade arrives at her planet after the Reckoning began. Kanaya suggests that Jade must heat up the planet by stoking the Forge, as part of her frog breeding duties as the Hero of Space. She accomplishes this in an extremely short time (several hours, as compared to Kanaya's "rushed" several week time) with help from Dave's time traveling powers. Jack Noir follows Jade around her planet while she was collecting frogs due to his loyalty to her given by the Becquerel-prototyping. Jack later fights Jade and Dave here as they are working on Jade's quest, killing Dave and forcing Jade to revive his dream self with a kiss.

Jade shrinks the planet, along with the others, with her god tier powers and takes them beyond the reach of the scratch. It was put into orbit in the post-scratch kids' session. Jade switched the planet with Derse to prevent it from being destroyed by Jake's Hope field. Aranea used her abilities to collide LOLAR with this planet in her battle with the Condesce.