Land of Pyramids and Neon

Land of Pyramids and Neon

Even in Death
(T'Morra's Belly Mix) ♫

The Land of Pyramids and Neon, abbreviated as LOPAN, is Roxy Lalonde's planet in the Incipisphere of the post-Scratch Medium. The planet shares themes with the rest of the session's planets of burial places and noble gases, representative of the dead end/inert nature of their session.

The planet is somewhat geometrical and covered in light orange pyramids and similar Egyptian-style ruins. Some of the pyramids appear to be made out of glass and occasionally flash red-orange, the color of electrically excited neon gas, while most others appear "cut" into quarters and give off various colors of light from their peaks.

The planet is surrounded with a thin atmosphere of pinkish gas. Roxy and Jane were first seen here in their Incipisphere, solving a puzzle that apparently involved Roxy sendificating a Window to the top of a pyramid at range to let Jane enter a gate, a process which is highly reminiscent of the Portal videogame series. Like the other Planets in their Medium, it presumably has skeletal Underlings. 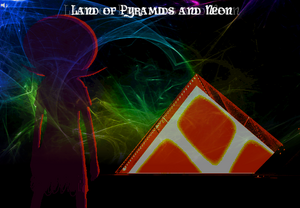 The Land of Pyramids and Neon was revealed during [S] ACT 6 ACT 4, along with the Land of Tombs and Krypton and the Land of Mounds and Xenon.

It was one of two planets left undamaged after The Condesce and Aranea's battle, the other being LOWAS. Roxy took a dying Rose onto it, where Rose died. Then John and Roxy met Terezi, who instructed them to visit their denizens.

The retconned timeline LOPAN appears to be in perfect condition. 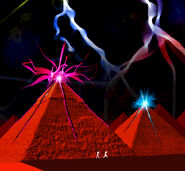 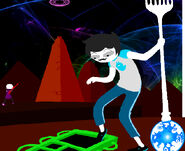