“Are you perhaps attempting to fuck With me?”

Capitalizes the letters V and W.

yall know i just do the music right ♫
Lanque Bombyx is a young Alternian troll living in Outglut during the time period of Hiveswap and Hiveswap Friendsim. His bullet points were "Still has a livechurnal", "Fang game on point", and "And, of course, he craves eternal life". Lanque was first revealed during the Hiveswap Troll Call event alongside Remele Namaaq on March 14th, 2018. Lanque was later featured alongside Barzum Soleil and Baizli Soleil in Hiveswap Friendship Simulator: Volume Eighteen. His bullet points were altered as from December 6, 2018 to "Sharp fashion, sharper tongue", "Occasional poet" and "Emotional vampire".

His first name could be derived from the word "langue" ("language" or "tongue" in French), or from the word "calanque", a cove or inlet on the Mediterranean coast of France. The Chinese word 揽雀 (Lǎnquè) is translated to 'Sparrow'. His last name is derived from Bombyx mori, the scientific name for silkworms, meaning 'silk' in itself.

Lanque is a jadeblood that lives in the brooding caverns, presumably tending to his assigned duties with his fellows. During the events of Hiveswap Friendsim: Vol. 18, he is found at Ardata's party, accompanied by an indigo girl and a teal boy.

If the player informs Ardata that they're too scared of what might transpire, the cerulean scoffs at their wimpyness but lets them and Lynera inside all the same. Lanque spots the player and Lynera by the door, then makes his way over to say hello. Once the pleasantries are done with, Lanque invites the player and Lynera to join him and his friends for a poetry reading session. Picking up where they left off, Lanque begins reading one of his more personal works, the raw emotion in his writing moving himself and others to tears. When it's Lynera's turn, she recites a short poem regarding her conflicted emotions towards Bronya, and becomes a little too upset to continue after that. Understanding how she felt, Lanque doesn't mind her abrupt departure and asks that the player makes sure Lynera gets home safely. On the way home, the player decides that strengthening a bond with an old friend is pretty rewarding in its own right.

If the player had previously assured Ardata that they are legally an adult and are prepared for her party potentially having sexual, upsetting or otherwise problematic events transpire at it, they're allowed to participate in her wild party. After Lanque makes his appearance and sends Lynera fleeing, he makes numerous advances towards the player. Bronya suddenly shows up at the party, prompting Lanque to drag the player into a room to hide. Should the player holler for Bronya's attention, Lanque is mortified by what the player's doing. Bronya knocks down the bedroom door and gives Lanque an angry lecture regarding his callous and reprehensible demeanor, warning him that failing to change his personality for the better would result in severe consequences. Not put off with her nagging, Lanque makes a retort meant to wound Bronya's pride, but Bronya refuses to sink to his level of cattiness and grants him a hard slap on the face. Finally relenting, Lanque somberly agrees to return home with Bronya, who drags him out by the ear, though he gives the player his chittr handle so that he could keep in touch.

If the player tells Ardata that they're ready for the mayhem about to take place, the player and Lynera step into absolute chaos. Before the player can ask whether Lynera's in favour of ditching the frat party, Lanque muscles his way through the crowd and expresses delight at Lynera's presence. While Lynera is rendered momentarily speechless by Lanque's surprisingly intimate hug, he turns his attention towards the player and observes them intently. The player's attempts to keep the conversation free from innuendos results in Lanque calling Lynera out on her backstabbing ways, though Lynera vehemently denies it at first. Lanque doesn't stop until Lynera leaves the party in tears, prompting the player to defend her honour. Scoffing at the player, Lanque clarifies that Lynera deserved every moment of it before asking the player to be his date for the night instead. Lanque purchases some drugs from Elwurd and offers the player some, but gets grumpy when the player refuses to do so. While dancing with the player, Lanque is incredibly flirtatious and forward with his intentions, though the player later goes along with him. However, Bronya appears at the party, forcing Lanque and the player to hide in an empty bedroom. Lanque then reveals that he'd like to pail with the player, since it won't be long before he's sent off planet.

Should the player let Lanque have what he wants, they are completely spent of energy once things are done. The player asks for Lanques Chittr handle so that they can contact one another, but Lanque is reluctant to do so. He later awkwardly explains that the player wasn't that good in bed, so there would be no point for him to call them twice. He takes his leave, the player feeling extremely ashamed of their inability to satisfy.

In Lanque's SFW route, he is a kind and patient person who takes great care to not upset anyone around him. Throughout the entire poetry reading session, he remains perfectly understanding towards the needs of others and is respectful of his companion's boundaries; when the player is startled by the abrupt hand holding, Lanque warmly informs them that they aren't obliged to conform if it makes them uncomfortable. Another example would be when Lynera is too overcome with emotion to remain at the party: Lanque doesn't mind her sudden need to leave in the slightest, merely imploring that the player take good care of Lynera while they head home.

Apart from that, Lanque (in his SFW route) has a profound love for poetry and pours his heart and soul into his works. After inviting the player and Lynera to join his circle of friends, the untitled work he proceeds to recite has deep emotional resonance and a majestic beauty to it. Despite his proficiency for the art, he doesn't look down on others who might not be as good as he is when writing poems. Lanque firmly believes that poetry is all about expressing one's feelings; it doesn't really matter if the prose is a bit short in length or not as lyrical as others might be.

However, his personality is completely different in his NSFW route. Lanque is shown to have a sharp tongue when dealing with those he detests; when calling out Lynera for her tendencies to make snide comments about other people, outright calling her a snake, Lanque doesn't shy away from asking incredibly pointed questions to undermine Lynera's flimsy excuses and outright denial. He quickly manages to reduce Lynera into a puddle of tears, smugly remarking that she deserved the verbal lashing she got.

In addition, Lanque is both promiscuous and flirty in his demeanor. Before completely ripping into Lynera, he spends a few moments being unexpectedly intimate with her, which ruffles her immensely. When she's gone from the party, Lanque zeroes in on the player and goes out of his way to make it absolutely clear that he's into them, albeit in a physical sense. The moment he gets a quiet moment with the player, he unabashedly asks to pail with the player, claiming that they would like to try it before the chance is gone forever. However, he later tells the player that they weren't particularly good in satisfying him in bed and leaves without so much as a backward glance. He's also extremely manipulative, initially telling the player that it was his first time pailing with someone, and only revealing that he had pailed numerous times before after finishing.

He is also shown to partake in risky behavior: he appears to purchase drugs frequently from Elwurd, and offers the player a capsule. When the player absolutely refuses to try any potentially dangerous substances (even more so as alien biology differs from human ones), Lanque immediately assumes that the player is a boring person, and then proceed to give the drugs to Diemen instead. Despite the player's reasonable justifications, Lanque still holds the belief that the player isn't one to try new daring things.

Lanque appears in Hiveswap: Act 2 as a minor character. His personality in Act 2 appears to be closer to his NSFW route in which he is generally rude and stand-offish, but with less of a flirtatious demeanor. He talks at various points in the case and is the true culprit. When spoken to before the case, he tells Joey to leave him alone rudely.

In Wanshi's route, she says that "I only have one friend to play with here, and he usually pretends he's too cool". Given that she had never left the brooding caverns before her route, it was likely she was referring to Lanque.

Lanque, depending on if you choose the NSFW route or not, either has an incredibly hostile demeanor towards Lynera or a friendly one. In his NSFW route, he considers her to be just as much of a snake as he is, but finds her irritating due to her not admitting it. According to Lanque, Lynera would talk negatively about him behind his back, voicing her disdain of his promiscuous lifestyle and his habit for shirking his duties, which he considers extremely underhanded. While initially flirtatious and handsy at the beginning of his mature route, he quickly becomes icy towards her, shooting dismissive or rude comments at her, until he eventually calls her out on being just as much of a bad person as he is, which causes her to leave, humiliated and in tears.

Lanque dislikes Bronya's meddling in his personal life, more specifically in his nightlife, or his one night stands. He considers her to be incredibly overbearing, reminding her that she's not his lusus. Bronya holds contempt for Lanque, due to frequently leaving the brooding caverns to go to parties, his vicious words to Lynera, and his implied careless relationships with people in his flushed quadrants.

As mentioned by Bronya and in his volume's NSFW route, he is implied to not take his flushed relationships seriously.

An insert screen that appears before Lanque's bad end in Friendsim Vol. 18. 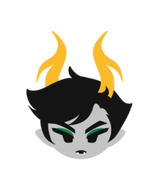 Lanque's sprite from the trial

Retrieved from "https://mspaintadventures.fandom.com/wiki/Lanque_Bombyx?oldid=246354"
Community content is available under CC-BY-SA unless otherwise noted.