The laws of physics presumably govern the worlds of Jailbreak, Bard Quest, Homestuck and most importantly, Problem Sleuth. In the latter adventure particularly, it is made quite clear that the laws of physics must be followed closely since any inconsistencies would just be so stupid!! Stubborn adherence to these laws of physics occasionally causes problem for Team Sleuth, such as one ongoing struggle to get electricity supplied to the fan, or the tragically short lifespan of the Higgs Bonehead really being just a bit too tragically short. Dark Matter Mobster Kingpin seems to be abusing these laws as he becomes increasingly heavy to protect himself from attack.

Mass is a measurement of the amount of matter in an object, and determines how heavy an object is at a given gravity.

Volume measures the amount of space an object occupies in three dimensions. If an object's volume is sufficiently small relative to its mass, there could be unforeseen consequences.

The Speed of Light[edit | edit source] 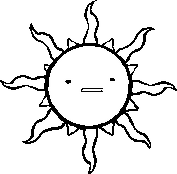 The speed of light (often represented as a lowercase letter c) is the speed at which electromagnetic energy always travels in a vacuum (299792458 meters per second). No information can travel faster than the speed of light, which is a universal constant. The reason this speed became relevant to Problem Sleuth is due to the scenario involving the fan and its incredibly long cord. Normally, in an electric current, the electrons do not travel very fast at all, but rather just sort of bump around. However, the speed at which the electric field is established along the cord is equal to the speed of light (or somewhat less, due to differences between Maxwell's equations in material versus in vacuum), and thus the field took quite a while to be established in the fan itself.

Physics is also an explored subject in Homestuck, though the physics are somewhat looser and often involve abstract concepts and pseudoscientific ideas, applied on a cosmic scale rather than a subatomic. Time travel, quantum physics, pocket universes, teleportation, majyyks SCIENCE, and the like all feature in the adventure. Faster-than-light travel features heavily in Homestuck; the Ψiioniic could use psychic powers to make the Battleship Condescension travel faster than light. Andrew Hussie seems to be unaffected by the speed of light either, as he can notice a clock's nanoseconds ticking and yet move around freely.

It should also be noted that Hussie has the nature of relativistic effects exactly backward; a ship moving near lightspeed would cover a distance of one yard (as measured from the perspective of an external observer) in less than three nanoseconds in its own frame of reference, not more (and certainly not three years

). Naturally, Hussie has addressed this point explicitly, with no fewer than five explanations.

Although the laws of physics do not fully apply to Hussiespace (where Hussie's Mansion and the yellow yard exist), the Furthest Ring, and the dream bubbles; they are fairly consistent between Universes and Incipispheres, as objects can freely (but not efficiently) pass between them while remaining stable, which they would not be if the laws of physics applied to them differently than the circumstances in which they were created (e.g. a red object would appear blue if the physics of photon wavelengths were different, or a rock would explode if its atoms were no longer securely bonded together because bond physics had changed, etc).

Retrieved from "https://mspaintadventures.fandom.com/wiki/Laws_of_physics?oldid=222496"
Community content is available under CC-BY-SA unless otherwise noted.