“Legendary shit is everywhere out here. I'm seriously up to my ass in legend.”

In the course of MS Paint Adventures, several weapons have been described as being legendary.

While in Trickster Mode, the post-scratch kids “recreate a series of legendary weapons from the seven continents of a magical kingdom from cherubim folklore.”

Each of these weapons costs one zillion Zillium grist.

“There she is. Forged in fire by the smiths of Pipplemop, commissioned by the sage Lord of the Wozzinjay Fiefdom in the Realm of the Snargly Fruzmigbubbins”

The Warhammer of Zillyhoo first appeared in a Problem Sleuth extra

(with the same flavor text as in Homestuck later), and as such has been known about for much longer than the other weapons. Even in Homestuck, it first appeared thousands of pages

. It has been retroactively revealed to allude to the word "who" in its name. It falls under the Hammerkind specibus, and as such is usable by John. However, as John has since alchemized the Pop-a-matic Vrillyhoo Hammer from it, the Warhammer is likely to be left unused. Which is probably how it ends up available for the time shenanigans that result in it being given to Terry Kiser and ending up in John's possession anyway.

“Plucked from the revered utensil drawer of none other than the Chieftain of the Trifletoot Clan himself, polished to a gleam in his loincloth by his devoted Abecedarian Buttersquire”

The Battlespork of Zillywut alludes to the word "what" in its name, and presumably falls under both the Spoonkind and Forkkind specibi, perhaps merging them into simply Sporkkind. This makes it usable by Jane. 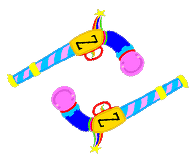 “Each was hand crafted by the seniormost Artillery Hermit of the hallowed Schundermoist Caves, to be mounted in times of peace upon the Royal Burblemonk's personal Placard of Dwib”

The Flintlocks of Zillyhau allude to the word "how", and fit Jake's 2xPistolkind specibus. The Artillery Hermit of the Schundermoist Caves is likely a reference to Cave Story: a pistol is found in the underground home of a hermit gunsmith in the first level of the game. They were seen being wielded by Jake English.

The Cutlass of Zillywair alludes to "where". It was seen being wielded by Jade Harley.

“Cast from the most priceless squippyclink ores mined from the famous whooping volcanoes owned and curated by the distinguished Maximillion Hotpocket Puckershuttle Junior, and then packed to the brim with the hilarious traveling Grief Miser's explosive winklepork snuff”

The Blunderbuss of Zillywigh alludes to "why", and presumably fits the Riflekind specibus. This may make it usable by either Roxy or Jade; Roxy is more likely, given that Jade no longer has much use for a specibus allocation.

One of Dirk's amazing swords is an outlier for a few reasons, one of which being that the full flavor text for it was given over 1200 pages before the trickster arc:

“A real hard sword for a real hard dude. It was said to be forged by an ancient Otaku Master over the heat of a roaring manga fire. It was cooled in an enchanted spring where virgin horses nicker and bathe, and was said could be used only by one whose pointy anime shades were deemed sweet enough, and whose hair existed in a perpetually sculpted state of looking completely fucking awesome.”

During the trickster arc, it simply reads as follows:

“A real hard sword for a real hard dude. It was said to be forged by a Japanese master over the heat of a roaring manga fire. It was cooled in an enchanted spring where virgin horses bathe, and

This is the only one of the seven Zillium weapons to not allude to any question word in its name, although a process of elimination would implicitly associate it with "when". Thanks to the naming mythos of the weapons, the katana implies that the magical kingdom has a continent called "Unbreakable" or "Katana". Unless of course we simply haven't been told its actual name. It also does not bear any similarity to the other Zillium weapons in terms of appearance.

Curiously, the Quills of Echidna are the only weapon to have been explicitly cited

as being sufficiently potent to activate scratch constructs, and both known scratches have been carried out using them. However, Bro damages the surface

of the Beat Mesa with his sword, an action that Doc Scratch confirms

to have started the scratching process. Whether this is a result specifically of the katana's Zillium nature, or merely that it is a sufficiently potent weapon, is unclear.

The unbreakability of the katana is defied in [S] Collide, where Dave cuts it in two using Caledfwlch. Given that Caledfwlch is allegedly a weapon to which Lord English is susceptible, its ability to damage a supposedly invulnerable object may prove relevant. (It is also possible that it's "Unbreakable" properties were nullified due to close proximity to the "Juju Breaker" Crowbar.)

The Thistles of Zillywich allude to "which", and match Rose's Needlekind specibus. Whether they, like some of her other weapons, will also be Wandkind remains to be seen. The pure gibberish "origin story" of the weapon may be a reference to "Bibbidi-Bobbidi-Boo" or silly magical incantations generally, tying into Rose's interest in wizards, as well as Rose's earlier unintelligible speech while Grimdark.

The Zilly Santa is not one of the legendary weapons, and its grist cost is not stated, but given that Dirk has the FncySntaKind specibus, he may yet be able to use the kids' considerable quantity of these miniature abominations as a weapon at some point.

It was once hoped that even the ironies would not be sufficient to allow these things to ever reappear. That hope was misplaced, however, as Dirk uses a Zilly Santa to parry a blow from B2 Jack Noir during [S] Collide.

In Problem Sleuth, the Tectrix of the Arbitor is referred to as legendary

, as is its less innocuous double, Tectrixcalibur

. In addition, the Clown Pontificate has the legendary Hamper of the Jaded Fool's Ennui

Caledfwlch is repeatedly referred to as legendary; the first instance of this is by Equius, to which Dave responds, “its a legendary piece of shit”

. This becomes an ongoing gag, and Caledfwlch is referred to as a legendary piece of shit on several

. On the other hand, Davesprite merely calls it a "legendary sword" when talking to Jadesprite

, neglecting "piece of shit". It is later said

to be a weapon capable of inflicting damage on Lord English, apparently reaffirming its legendary status.

The "legendary piece of shit" gag is also used by Jade

to refer to Ahab's Crosshairs when Eridan gifts it to her, and continues in the next two page commands. Recap 3

also refers to both the Crosshairs and Caledfwlch as legendary (but not pieces of shit).

It is possible there may be another legendary zillium weapon, as none of them allude to "when".