Joey and Jude's beloved pet dog. She is seen hiding in her dog house during the events of Hiveswap: Act 1. Tesseract is likely a Great Pyrenees based on the floppy ears, and the body build.

Jude's carrier pigeons which he uses to send encrypted messages. This is a reference to The X-Files' Lone Gunmen. Their names are Frohike, Langly, and Byers, in reference to the last names of the Lone Gunmen. They also seem to represent the fate of Jude's different family members. Frohike, his favorite, suffered an early death and represents his mother. Langly cowardly runs away and abandons him, like his father. Byers goes to Alternia along with Joey.

They are black with neon green mouths. They come in all different forms such as serpent-like creatures, winged monstrosities, limb amalgamates, and giant thumb-like beings. 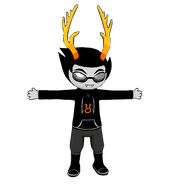 Xultan Matzos was a very popular arena stickball player. He was a rustblood Pusher that played for the Thrashthrust Snowglobes. According to Xefros, he revolutionized the Pusher position. He had a unique stance when swinging his cuebat, which Xefros tries to model his own stance after. Xultan also had extremely potent psychic powers, which further aided him in the game. Cohen confirmed in a reblog on tumblr that, like Stelsa, he is also troll jewish.

He was executed on the spot after a blueblood mind-controlled him and made him thrust his bone nook at that era's heiress. This seems to be the fate of most lowbloods that make a name for themselves.

Dromed Baktar was another popular Pusher. Significantly less is known about him than Xultan, but it is known that he knew to play Pusher very well and was also a capable psychic, though not as much as Xultan. While thinking about playing Pusher, Xefros consistently compares the attitudes of Dromed and Xultan.

A sloth-like lusus who is generally slow and tends to sleep in inconvenient places. Only moves when Xefros feeds him. The scientific name for this lusus is the GLACIAL TREETRUDGER, and his nickname, if not given a custom one by the player, is ZOOSMELL. However, his internal name is slugmeister.

A deercat lusus who initially chases Joey around Dammek's hive until she feeds him Lusus Milk and pulls a thorn from his paw. The scientific name for this lusus is the CUSPIDATED GRIMALKIN. Joey nicknames him CORNIBUSTER if the player doesn't choose a different one.

Cuspidated Grimalkin is a chimerical union of predator and prey, with a strength of both: long, retractable claws and razor-sharp teeth alongside of defensive crown of stabbing horns, the speed for lightning-quick dashes and the endurance to run entire nights without tiring.

Proud and resplendent, Cuspidated Grimalkin prefer to bond with bronzeblooded wigglers in whom they sense a strong aptitude for leadership. And the primary cause of death for Cuspidated Grimalkin is in the defense of their treasonous wards. Anecdotal accounts suggest that those Cuspidated Grimalkin who manage to survive the death of their wards will typically seek out a similarly-orphaned troll, and attempt to bond with them, although the selection process is, naturally, rather mysterious due to its staggering illegality.

Thirty-eight new characters from Act 2 were first revealed in the Troll Call event. 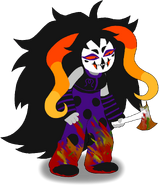 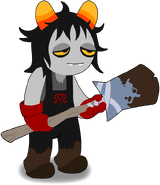 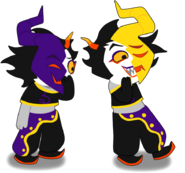 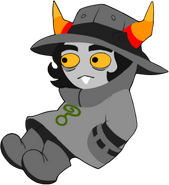 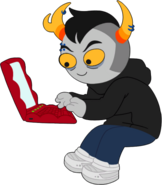 Many trolls appeared in concept art from when Hiveswap was to be in 3D and were later replaced with new designs in the shift to 2D development. A beekeeper who was once designed after a member of the development team was replaced with the beekeeper Zebede after that developer left the team; a fishing "gatherer" became Charun; a pirate themed character may have become Mallek or another pirate-like blueblood like Remele; and a rebellious legislacerator was redesigned into another of the game's tealbloods.

Also featured in early 3D concept art for the game were the two canonized fan trolls, whose involvement in the game is still as of yet unknown. 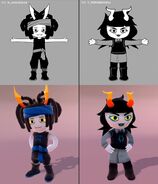 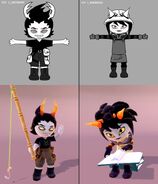 A Lemino "gatherer" and a yellow blooded "beekeeper"

A desk troll with horns the shape of cut tickets
Community content is available under CC-BY-SA unless otherwise noted.
Advertisement