For the juvenile version of this character, see Caliborn.

“HOW DO YOU EXPECT TO OUTRUN ME”

Lord of Time (plus other components)

Lord English is an indestructible, all-powerful demon summoned at the end of the universe, although his time travel abilities allow him to appear prior to his actual summoning. Though the demon's true form is an amalgam of various powerful identities, he was originally the cherub Caliborn, who obtained unlimited power and unconditional immortality by clearing a dead session of the game. As a result, he apparently cannot be destroyed by ordinary means, but only through the exploitation of a number of time-based glitches and loopholes. He is the leader of the Felt on Alternia, and his current appearance resembles that of an adult cherub, sans wings. Vriska Serket describes English as “the 8ig 8ad”, saying “English was the guy who stacked the whole deck against us from the start, rigging shit to go haywire, wiping out our race, 8lowing up universes, exterimin8ting ghosts, slaughtering dark gods, and shattering reality itself.” English was the "demon" summoned by the unhackable.~ath file. He is the overall Main Antagonist in Homestuck as a whole.

Physically, English seems to be a hulking, veined, dark green wingless cherub with clawed appendages, a pool cue peg leg, and a head that bears more than a passing resemblance to that of Lil Cal, except skeletal and fanged, with billiard balls for eyes. English's muscular appearance is due to Caliborn's fusion with Arquiusprite, a prototyped sprite of Equius' remains and Lil Hal, within Lil Cal. As he "hatches" from Doc Scratch during the second intermission

English owns a Cairo Overcoat (an obvious mirror to Mobster Kingpin's Chicago Overcoat) that represents the spacetime continuum and gets damaged when time-related things get out of hand, and a Backup Coat, that may or may not possess the same qualities. The Cairo Overcoat can turn into an Egyptian sarcophagus, which English can entomb himself in in order to travel throughout time once inside a universe. It is possible that the Cairo Overcoat is a vague representation of an actual pool table, or perhaps only the felt fabric on which a game of pool is played(similar to how English himself represents a pool cue). Since Sburb (the overlying game in Homestuck) is played on the spacetime continuum, these two analogies mesh together almost perfectly. More recently, English has been shown to have in his possession a golden scepter similar in appearance to the King's Scepter, atop which is an glowing, multi-colored orb that possibly represents the Green Sun. This scepter seemingly demonstrates a more controlled form of Weapon/Object Duality, as it has been shown to morph into a golden assault rifle. Andrew Hussie met his end by this transforming scepter.

English has never known any form of defeat. In addition to his indestructibility, multiple incarnations of him exist simultaneously in multiple universes, making it virtually impossible to permanently end his existence. Despite these overwhelming factors, Aranea believes that Jake is destined to best English in combat, which would mark the demon's first defeat and send hope to others that one day he may be destroyed forever. A statement made by Dave indicates that he believes he's meant to kill Lord English at one point, this is also believed

by the Condesce who is attempting to encourage Dave to fulfill his role. Dave's sword, Caledfwlch, has also been stated to be capable of harming English due to one of its components being the magic cue ball, as the sword was originally found as part of Dave's quest it would seem to re-enforce the idea that Dave is the one destined to defeat English. It is mentioned

that there is a weapon capable of destroying Lord English, possibly 'in one shot'. This is in reference to The Treasure.

It is hinted that although English is an adult cherub physically (aside from his lack of wings), he may still be a child mentally. Andrew confirms this, saying that he used the dream self game mechanic to dominate his sister in an unnatural way, meaning he was missing critical maturation from living with her. This unnatural predomination is actually why he lacks wings, as they typically sprout during the predomination process and the associated maturation.

In [S] Collide, English is shown taking on many God-Tier trolls at once. Given that they presumably used all of their abilities on him at once off-screen, this would make him stronger than even the combined strength of many God-Tier players. Vriska implies that his attack power is stronger than anyone else she's aware of, since he can kill ghosts and no one else can

. Also according to Doc Scratch, English is stronger than Bec Noir

(Note: Since it's difficult to know the chronological sequence of English's actions throughout the story, the following events are written in the order they appear in the comic. For English's history as a child, see Caliborn)

The Midnight Crew Intermission introduced English as the leader of the Felt. Spades Slick attempted to pry open English's vault with Crowbar's crowbar, which transported him to a timeline where everyone except him, Snowman, and presumably English were dead.

During Rose and Dave's chat in which she reveals her plan to use her dream self to destroy the Green Sun, Rose mentions that she had help thinking up the plan from Scratch, who says he successfully completed everything that English required from him. Scratch also mentions that his death is required for English's arrival, and that throughout the countless universes in which instances of him have been created, he has never failed in bringing him back, and never will.

Scratch also mentions that English is a very evil man and that his name is merely a title, and not the demon's actual name. According to the narrator, to know his true name is to "understand terror no human ever has." However, there is one scene starting here

in which the audience does get to see English, and he appears to be Andrew Hussie himself. However, Andrew then confirms

that he is not actually English; he is only wearing his coat (which is much too big for him).

Then, a small portion of him (his eyes) was revealed in these

When the Handmaid tries to escape from Scratch's manor, Lord English intercepts her and takes her into his service. Later, the Handmaid enlists the Condesce to continue English's service in another universe; namely the post-scratch human session.

In Intermission 2, the ~ATH program was shown to execute after Snowman had died, destroying the trolls' universe. Scratch's body is used to create or channel English, for as we all know, Scratch is an excellent "host". At this point, English was revealed in full. Upon his "release," he summoned his Cairo Overcoat, which then transformed into an Egyptian sarcophagus, which closed over him and traveled back in time. He then made two loud honking sounds, an event referred to as the Vast Honk.

Interestingly, during English's summoning the parts of Scratch's genetic code that were written in the troll's Flarp rulebooks occur. The grandfather clock “t1CK”s and “t0ck”s. After which the “8r8k” “H34DS” occurs as Scratch's head breaks. Then English proceeds to “honk HONK”.

As of this panel

, English has somehow entered Andrew Hussie's home (possibly through the Fourth Wall that Hussie used to enter Scratch's home) and seemingly destroyed the Hussiebot. He is seen in possession of a Golden Cuestaff. The head of the cuestaff flashes multiple colors (blue, cerulean, yellow, orange, red, and gray) and is sometimes replaced with an image of the Green Sun. After giving poor Ms. Paint a CANEing with it, he proceeds to corner Hussie, turn the cuestaff into an AK-pattern rifle with a Green Sun sight, and messily gun our beloved author down.

Immediately after killing Hussie, English enters his sarcophagus and flies through the Furthest Ring. He lands inside a dream bubble containing the doomed timeline versions of the pre-scratch kids and post-scratch trolls. Using the White Wand, he conjures a beam of energy that bursts from his mouth, killing the doomed-timeline characters and destroying the bubble in an explosion visually reminiscent of shattering glass. It is possible that this has caused harm to the Horrorterrors as one of them was shown to have a cut limb, however this could also have been caused by Jack Noir as he was nearby the wounded Horrorterror. This was witnessed by Dave possibly as a callback where he first listened to the Horrorterrors saying to Rose that they are being killed.

Back in Hussie's home, Spades Slick is shown to be seeing a "big overpowered gold machine gun" and notices that he has "very different styles when it comes to running an organized crime outfit."

Eventually, it was revealed

by Caliborn, through the medium of incredibly shitty breathtakingly gorgeous claymation, that English is and always has been a composite of Caliborn, Arquiusprite, and one half of Gamzee. As of yet, the full implications of this are yet to be seen, but they were partially addressed in [S] MSPA Reader: Mental Breakdown.

It is also revealed that Caliborn adopted the name "English" after his first defeat at the hands of Jake, who overpowered him with his Hope aura.

English's ultimate fate is left ambiguous in [S] ACT 7, but he is at the very least deprived of first guardian powers due to the destruction of the Green Sun.

English without his coat.

English during the Undertale-style battle in Collide. 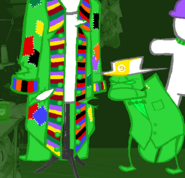 unhackable.~ath, the code that summons English

The server that contains the code that summons English 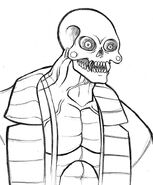 A clear view of English's head. 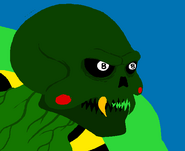 English gets more terrifying with every new view of his face.

The less innocuous double of the already not-very-innocuous staff.

The poster in Jake English's room.

English floats past the remaining unopened sub-acts of Act 6.
Community content is available under CC-BY-SA unless otherwise noted.
Advertisement