Starts her lines with a "-" and doesn't use capitalize letters except for emphasis. Uses a lot of exclamation marks and sometimes surrounds parts of her sentences with three of them on each side.

Her first name could be referencing Álvaro García Linera, a Bolivian vice president and a fan of Marxism. Her last name is reminiscent of Kārlis Skalbe, a Latvian writer, poet and activist in the late 1800's who wrote 72 fairy tales.

Lynera is a jadeblood living in the brooding caverns, tending to the Mother Grub with her fellows. During the events of Hiveswap Friendsim: Vol. 11, she intercepts the MSPA Reader just as they are about to enter the caverns to hang out with Bronya. Claiming to be Bronya's best friend, she angrily demands to know the player's exact relationship with Bronya.

If the player exaggerates their friendship with Bronya in an attempt to save themselves, Lynera remains apathetic to the player's bluff and hisses in the player's face. The player realizes that if Bronya's text had been intercepted, no one would notice if they were to suddenly disappear from existence. Lynera lunges at the player, her speed immensely startling.

Should the player attempt to make an escape while Lynera is too busy wailing, they will grab hold of a nearby notebook that has a sharp edge. Lynera turns to face the player just as they've freed themselves, the player warning Lynera to stay away or they will use their "acidic spit" to destroy the notebook. Horrified, the jade steps aside, but the player doesn't intend to leave without their palmhusk. Lynera disagrees at first, but when the player blackmails her, she caves to the player's demands and lets them reclaim their device. Thoroughly upset with the player's heartlessness, Lynera screeches that Bronya is her only friend, clutching her notebook to her chest while the player makes a break for it.

If the player demands to know what right Lynera has to creep on Bronya's phone, Lynera will indignantly inform the player that it's her duty to make sure that no one suspicious leads Bronya astray from her duties. Lynera proceeds to knock the player out, dragging them to her private study cave and tying them to a chair. When the player regains their consciousness, Lynera waves a knife dangerously close to the player's face and urges the player to state their real intentions towards Bronya. She then talks about her relationship with Bronya, evidently upset and distressed over their current friendship dynamic. The player tries to console and reason with Lynera to no avail, the jade openly weeping in front of the player. Should the player attempt to comfort her, they will accidentally tip their chair over, almost impaling themself on Lynera's knife before she catches them and pulls them to safety. Touched by their gesture of kindness, Lynera liberates the player from their bonds. In response, the player takes Lynera to a cafe so that she could make more friends instead of stubbornly fixating on Bronya. Things don't quite go to plan, but Lynera insists that having the player as a friend would be enough for her. The player hopes that Lynera would someday be able to form healthy attachments to others.

Lynera is a troll with a distrustful and stringent nature, immediately suspecting the MSPA Reader to be a spy when they come to meet Bronya in the brooding caverns. Despite the player insisting that they aren't in league with hostile parties, Lynera ignores the player's claims and continues to treat them with nothing but harshness. When the player takes her to a cafe to interact with trolls of other castes, Lynera is unable to fully relax as she has trouble viewing others with an open mindset. Apart from that, when a teal comes by to chat, Lynera remains cagey as ever and winds up lashing out at a potential friend.

Lynera is also shown to be quite emotional; she is either incredibly angry or upset depending on the situation. Upon meeting the player, she furiously demands to know why the player thinks they could possibly be friends with Bronya, snapping that the player was nothing but a nusiance to everyone around them. When Lynera speaks about her less-than-likely chance of being matesprits with Bronya, she bursts into tears as she is visibly distressed with the nature of her current relationship with the other jade. Overall, it can be assumed that her emotions tend towards extremes, which makes her emotionally volatile and rather difficult to manage.

She also has murderous tendencies, which might be related to her unstable emotions. She has absolutely no qualms brandishing a knife in front of the player, and her study cave has ominous blood spatters here and there. When ranting about Elwurd, Lynera mentions wanting to brutally murder the cerulean for being such a terrible person to Bronya. In one of her bad endings, she attacks the player out of sheer jealousy, hissing that only she would be Bronya's friend. Yet in her good ending, she hastily informs the player that she never really wanted to kill them right after she puts them out of harm's way.

Despite this, Lynera is very dedicated to her work in the caverns and is Bronya's second-in-command. This causes her to be somewhat reclusive, in turn leaving her with very little opportunities to leave the caverns and meet other people. She is fascinated with her duties as a jadeblood and troll reproduction, spending most of her time reading relevant tomes. Lynera is also quite a stickler for rules and organization; she mentions that she has a whole study cave to herself solely because she found rule-breaking jades intolerable.

She is also shown to be very posessive over people in her life, and her crush on Bronya is implied to be somewhat unhealthy due to her obsession with the other jade. Lynera invades Bronya's privacy by checking her phone, and expresses frustration over the fact that numerous others would like to be friends with Bronya. As Lynera wants Bronya all to herself, this drives her up the wall. A testament to Lynera's excessive passion for Bronya would be her corkboard: numerous photos of Bronya are tacked up there, and Lynera has a notebook dedicated to documenting precious moments spent with Bronya.

On the rare occasions she does venture out of the caverns, she is shown to be socially anxious. For example, when she and the reader goes to Ardata's party in Lanque's NSFW route, she was described to be a bundle of nerves when in a room with so many people. Her social anxiety causes her to talk awkwardly, and say things incredibly fast.

Lynera is obsessed with Bronya, and is extremely clingy over their relationship. While Lynera would rather remain as Bronya's faithful friend as opposed to outright losing her, Lynera is clearly distraught with the arrangement as there's a distinct possibility that someone else might win Bronya over. Even so, Lynera finds it difficult to communicate with Bronya about her feelings, choosing to keep it a secret from everyone. While Lynera is aware that her fixation on Bronya isn't healthy by any means, she stubbornly refuses to move on and insists on depending solely on Bronya for all her emotional needs. Lynera also mentions that watching Elwurd mistreat Bronya was excruciating to watch, adding that she would viciously attack the cerulean the next time she dared set foot in the brooding caverns. Lynera's poem "Still" in Lanque's SFW route gives more depth to Lynera's obsession with her, and how she hates that she can't get over her unhealthy feelings for Bronya, but nevertheless is at least attempting to change and become more open to others.

Wanshi has a tense relationship with Lynera, who acts as her caretaker and gives her lessons in the brooding caverns. However, Wanshi finds Lynera's lessons (which she mentions to include a lot of yelling) to be boring, causing her to sneak out of the caverns. Wanshi seems to know that Lynera holds Bronya's opinion in very high regard, though it is unknown if she knows the full extent of what's really going on. Lynera, though she seems visibly irritated with the young troll, was very worried for her when Wanshi ran away. Though she tries to cover this up by claiming she was worried she would get in trouble, the MSPA Reader understood that she secretly cared for Wanshi. In Wanshi's good ending, Lynera could be seen watching her and the player from inside the caverns.

Lynera and Lanque have an icy relationship in his NSFW route. In this route, Lanque was initially very flirtatious and handsy with her, which caused her to become extremely flustered. Though this exchange soon turned very bitter. According to Lanque, Lynera had been gossiping behind his back about her distaste for his promiscuous lifestyle. Lanque considers her to be a viscous bitch, and finds her aggravating when she doesn't admit to it. After listening to Lanque's slurry of insults about her virginity, Lynera runs out of the party in tears. When questioned by the reader, Lanque says he regrets none of what he said, and claims that she got what she deserved. In Lanque's SFW route, Lynera is initially nervous at meeting Lanque, and reveals she's afraid of him, possibly due to his charisma contrasting her social awkwardness. However after having a warm reception after reading her emotional poem by Lanque, Lynera feels appreciation towards him, and considers him a friend. Because of the disputable canonicity of Lanque's route, it is unknown which of these relationships with Lanque are true for Lynera. 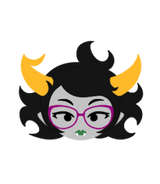 Lynera's sprite from the trial