Mangrit is a trait that increases as John Egbert levels up. The icon for Mangrit is a silhouette of Dad's profile, similar to the one on the cover of The Fatherly Gent's Shaving Almanac.

Mangrit appears to be used as an indicator of brute strength, manliness, and age, as Nanna mentions in a letter on the inside of her copy of Colonel Sassacre's Daunting Text of Magical Frivolity and Practical Japery that having enough Mangrit to lift said book is a sign of maturity. Dad hid a note behind the family safe congratulating his son on now being old enough to lift the safe out of the way to see the note.

High levels of Mangrit allow a person to perform obscene shows of strength; Dad, for example, is capable of punching opponents through solid brick walls, break through bars, and lift big (but not big enough) safes. John can utilize Mangrit to perform powerful attacks. 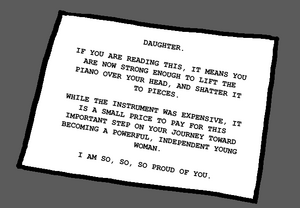 It is not known yet if Equius is constantly using Mangrit or if he is simply just STRONG. Some readers are debating this.

John's father is constantly leaving the aforementioned notes behind, in places such as his wallet, behind a safe, and in his room, all increasing John's mangrit. As he is leaving so many notes behind, their emotional impact is waning to John.

This article is a stub. You can help MS Paint Adventures Wiki by expanding it.
Retrieved from "https://mspaintadventures.fandom.com/wiki/Mangrit?oldid=218001"
Community content is available under CC-BY-SA unless otherwise noted.