Maplehoof is the name that Rose Lalonde has bestowed upon her beautiful pony. Mother gave it to her as part of her Guardian Rubric: Ironic Indulgence attack. While Rose at first Abjured Maplehoof, it seems she's developed a small amount of affection for it, giving it a pat on the snout in a begrudging way.

Maplehoof was apparently purchased by Rose's Mom at some point, and gifted to Rose during a strife

on 4/13. While Rose initially abjures the pony, she quickly warms up to it.

It enters The Medium alongside Rose, still roaming within the Lalonde house, but disappeared along with her Mom. It was later revealed that Rose's Mom took Maplehoof with her when she left the island per boat. It follows Rose's Mom's scent into a cave and comes across the aftermath of her strife with an enemy of the Land of Light and Rain, collecting the huge amount of grist left behind, sending it to Rose's Grist Cache. The overflow is sent to the Grist Gutter to be redistributed to the other players. Maplehoof demonstrates a surprising amount of intelligence when it stands on its hind legs to be safely transportalized, following Mom to the ectobiology lab hidden in The Veil.

When the paradox clones are sent back during The Reckoning, Dave Strider travels alongside Maplehoof. Unfortunately, it was killed

upon impact with Earth, saving Dave in the process. Its hide was strangely made into a bib by Dave's Bro for him.

Maplehoof, or a similar horse, is seen with Dirk's Bro in front of O HOPYW OODO OL Hollywood, possibly implying that Maplehoof managed to survive impact in this instance. Unless, of course, Dirk's Bro liked to take its stuffed corpse with him wherever he went.

A tiny version of Maplehoof (also known as ♫ Minihoof) is seen in Dirk Strider's room. Although it was initially believed by the fandom to be a figurine, it turned out to be an actual pony when it woke up from a nap on Dirk's Honorary Placronym. It is unclear if this is the same Maplehoof or not. While shrink ray technology does exist within the Homestuck universe, a direct explanation for Minihoof was never given.

A link to a secret page

at the end of [S] Rose: Fast forward to now.

has been added as a post-scratch counterpart in which Roxy watches as the tiny Maplehoof gallops across the screen. It is also discreetly linked from the similar [S] Frigglish: Fast forward to Jaspersprite.

. There are similarly brief instances of Scribble Mode.

The command showed up a third time

, this time as a canonical animation. It does not feature Scribble Mode, the standard animation, or the song "Pony Chorale" (instead opting for Equius Zahhak's walkaround theme, "Horschestra STRONG Version ♫"). It does, however, use the background from the two prior animations. Upon his creation, Arquiusprite majestically floats in the fantasy field, and a herd of Maplehoof-like robots gallop for over a solid minute. Gamzee Makara and the reader are moved to tears.

There appear to be Alternian versions of horses similar to Maplehoof called Aquatic Hoofbeasts. They resemble the mythological Hippocampus of Poseidon and are groomed and cared for by Feferi Peixes. Along with Maplehoof's signature heart, there is an Aquatic Hoofbeast with a spade, referencing the troll's system of romance. 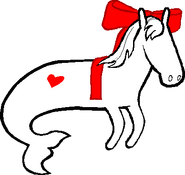 An aquatic hoofbeast with a heart mark. 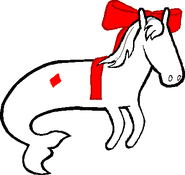 An aquatic hoofbeast with a diamond mark. 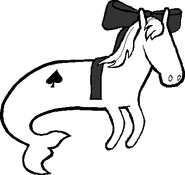 An aquatic hoofbeast with a spade mark. 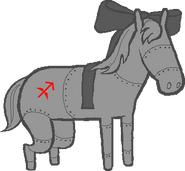