No punctuation, no capitalization. Speaks in a varied jumble of slang. Uses :o) faces sometimes.

CLOWNFUCKER ♫
Big Marvus Xoloto is a young Alternian Troll living in Outglut during the time period of Hiveswap and Hiveswap Friendsim. Marvus was first revealed during the Hiveswap Troll Call event alongside Ardata Carmia on January 31, 2018. His bullet points were "runs the shitshow", "midsummer nightmare", and "texting your sister". He was then featured alongside Fozzer Velyes in Hiveswap Friendship Simulator: Volume Sixteen. His bullet points altered as from December 6, 2018 to "Runs the shitshow", "Slam or Get Culled Grand Champion" and "Mirthful idolatry". He was designed by Adrienne Garcia.

Marvus could possibly be a reference to the Insane Clown Posse album ‘The Marvelous Missing Link’. Marvus also shares the name with an elderly dwarven-like character in the Antiquitas Lost novel and to a side character in the Encantadia series. Xoloto is an outdated spelling of the Nahuatl word xōlōtōn which can translate to page, slave or servant boy. It could also come from the Coldplay album Mylo Xyloto. Xoloto could be a modification of the Russian word for gold, "zoloto (золото)", and could also be based on Xolotl, the immortal god of monsters, as the mirthful messiah Lord English was an unkillable monster, as well as Marvus himself being a "monster" in the sense that all purplebloods are.

Marvus is a purpleblood singer and performer, acclaimed to be the best in their associated circles. He cameos in the background of Remele Namaaq's art show in Volume Seven and debuts in Vol. 16, where he is mentioned to be performing at ClownFest XXwreX.

If the player agrees to go to the concert with Zebruh, the indigoblood will excitedly take the player to said venue. Marvus is first seen entering the music festival with his entourage of bodyguards, then disappears backstage for the moment. When the purpleblood finally takes the stage, everyone is enraptured with his incredible performance. Before the player can truly enjoy Marvus' musical genius, Zebruh reminds them that they have an agreement—the player was to do something spectacularly stupid so that Zebruh can impress Marvus with his bravery and suchlike. Should the player disregard the promise they made earlier, the indigoblood storms off in a huff. The crowd gets rowdier around the player, but they are beyond determined to enjoy Marvus' performance and survive the first ordeal. As it were, the player still passes out for a brief moment until Marvus rouses them. Shocked with Marvus' kindness, the player stares blankly at the purpleblood until he takes them upstage for a dance. Paying heed to the demands of the crowd, Marvus has the player tied to a cross so that a public execution may take place. Right before Marvus impales the player with his weapon, his armpit is revealed for a moment. If the player decides to respect themselves, Marvus doesn't actually kill them onstage, sparing their life (deciding to take a whiff of Marvus' armpit has the exact same outcome). Following Marvus' discreet instructions, the player pretends to be dead until all spectators are killed in the following frenzy. Freeing the player from their restraints, Marvus takes the player backstage so that socializing may take place. The player is amazed at Marvus' stellar personality, elation overcoming them upon knowing that they've made a wonderful new friend.

If the player refuses to attend the music fair with Zebruh, the indigo will be quite affronted with the player's bluntness. Zebruh makes to leave, but winds up killing the player with his "malfunctioning" scooter. As such, the player never gets to meet Marvus at all.

Should the player go along with Zebruh's plan to scam the player's new idol, things go downhill rapidly when the enraged crowd tears Zebruh to bloody shreds (they thought he was an assassin after Marvus). Right before the same fate was handed to the player, Marvus hoists them upstage and states that they're one of his backup dancers. The audience takes his word for it, but more misfortune strikes when the stage equipment malfunction and injure trolls in the process. Right as a bloodbath takes place in the mosh pit, a disgruntled Marvus takes the player to the safety of the green room. The player expresses fear that they are in a non-canonical timeline, and discuses this with Marvus until a savage fight forces him and the player to seek refuge elsewhere. Marvus takes the player to Clown Church, hoping it would be enough to protect his new friend from the forces of canonical dissolution. When his limousine unexpectedly explodes, Marvus instantly protects the player from the fire and debris, sustaining wounds as a result. Worried sick and overwhelmed with gratitude, the player helps Marvus into the establishment and debatesa few key details concerning reality and existence. The player tries to relax for a few moments but is gripped with fear when paradox space warps reality.

Marvus appears in Hiveswap: Act 2 as an important character. He first appears in the train station where he helps Joey and Xefros get train tickets by indulging Zebruh and talking to Chixie. He then acts as “his honorable tyranny” of the case in the jadeblood and tealblood car and mostly just goes along with it, perking up when things get interesting. He seems to be nice and keeps the cool demeanor he usually has until the end of the game, where Marvus appears to be sadistic and ruthless, starting a game with Joey where he tasks her to kill trolls of a certain blood color. However in truth, he does care about Joey and is aware that she actually did not kill Cirava or Tegiri. When Joey is tasked to kill a purpleblood, he sends her out of the car for a while. Upon her return, Baizli steps outside to kill her. Suddenly, Xefros appears from behind to save her from the attack, accidentally killing Baizli in the process. When Joey questions Xefros on how he was able to escape Chahut’s grasp, he explains that Marvus ordered her to let him go, possibly because he knew the danger that Joey was in. However, he doesn’t seem to care about his fellow purplebloods beyond surface level as seen when Barzum is having a mental breakdown. He even congratulates Joey on the kill.

Marvus is a popular highblood singer with a cult-like following; his mere appearance at the music festival drives the crowd wild, which is also why he has numerous bodyguards to keep him safe from harm. Just about everyone applauds his creativity and ingenuity when it comes to music and dancing, the player also noting that his lyrics aren't racist in the slightest. While Marvus is happy with his fame in the creative industry, he mentions that being perpetually pestered to pail with teenagers frays the nerves somewhat (which is why he isn't too upset with his fans occasionally dying at the end of his shows). Even so, performing for his adoring fans is something he clearly lives for, and wouldn't want to disappoint his loyal fanbase in any capacity. When the stage equipment goes haywire and falls apart, Marvus becomes momentarily despondent as his show is ruined for the night.

While he is a well-known highblood performer, he doesn't take any pleasure in abusing his position on the hemospectrum. When the crowd demands that he publicly kill the player for show, Marvus instructs them to play dead so that the crowd doesn't notice what's actually going on. Marvus reveals that he saved the player's life because he felt bad for them. He's aware of Zebruh's less-than desirable personality and openly criticizes the indigoblood for constantly trying to worm his way up the social ladder. He is also aware of the subtle oppression in regards of his caste and despite not explicitly calling for rebellion, Marvus remarks that shaking up the system would certainly make things interesting. Marvus even goes out of his way to care for the player's well-being at every turn: saving them from crowd violence, consoling the player, feeding them food, shielding them from an explosion, and taking them to the one safe place he knows to try and escape impending doom.

Marvus is also strangely aware of the Time shenanigans and knows a lot in regards to reality and the details that do or do not contribute to it. When the player uses terms that normally don't make much sense in context (eg: non-canonical decision), he's able to grasp their real meaning in mere seconds and add on to the discussion taking place. Marvus firmly believes that a person's fate is in their hands and not the other way round, stating that every decision made contributes to the overall essence of existence itself.

He speaks in a very casual and easy-going manner, not changing his demeanor even when things aren't going alright; when Marvus is injured after protecting the player from a sudden explosion, he still maintains an air of detached calm despite being in clear pain and tries his best to soothe the player about their existence in the universe.

Marvus is shown to adore his numerous fans, making it a top priority to ensure that his shows never fail to inspire and dazzle the spectators present. While he isn't fond of being badgered by teenagers for pailing sessions, he still does his best to make sure that his performances are entertaining for all.

Despite not directly interacting with Zebruh in his route, Marvus expresses clear distaste for the indigoblood's leech-like mannerisms when it comes to getting it good with people of a higher caste. Marvus also reveals that Zebruh had been blacklisted from his events a long while ago (not that Zebruh seems to be aware of this particular bit of information), and helps his fellow purplebloods steer clear of the poisonous vine that is Zebruh Codakk. Marvus is instantly concerned about the player's mental faculties when they claim that Zebruh's cool; the purpleblood straight up calls Zebruh a parasite.

In Hiveswap Act 2 Marvus helps Joey out multiple times and is overall very kind and friendly to her. However upon reaching the purple highblood car he forces her to play a game to pass where she must kill three trolls from different blood castes. He is still kinder than the other purple bloods and willing to pretend to believe the evidence she brings of her murders, but it is safe to assume that Joey's feeling towards him are now very negative.

In Hiveswap it is possible to connect Marvus and Chixie. If you tell Marvus that Chixie is planning to do a protest he will offer to help her be safe by collabing with her. Though she at first doesn't trust him due to being a highblood she will go along with it and they seem to get along well though its unclear if he's just pretending.

In Hiveswap Marvus acts friendlier to Zebruh, listening to his music and encouraging him to go on slam or get culled but its' unclear how genuine this is because he is attempting to help Joey.

Marvus seems to be on good and friendly terms with Karako, Chahut, Barzum and Baizil but does not seem to mind them dying, and finds it funny when Barzum is in distress over Baizil's death. 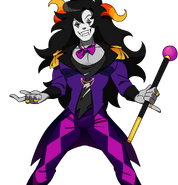 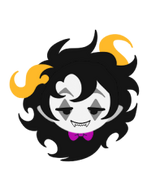 Marvus's icon from the trial

Marvus in the Troll Call without his hat.