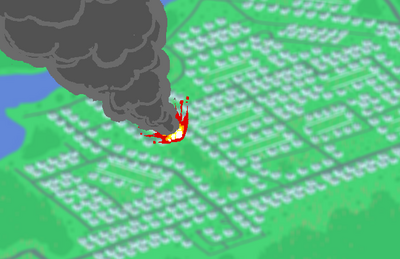 Meteors (although most of the objects labelled as such in Homestuck are actually meteorites) are an important element of Sburb. They are summoned from The Veil during The Reckoning and sent to destroy Skaia, which defends itself with portals that send the meteors to various points in space and time. In terms of the game, meteors are good motivators at getting client players to learn the basics of the game quickly and transport their house to The Medium before they are destroyed in the impact.

Although the majority of the meteors are sent to the time when the game is played, others are sent to different time periods as well. John's Dad keeps several reports of meteors hitting inhabited neighborhoods within the past hundred years or so, and at the end of Act 2, a meteor is seen striking the area that later becomes Jade's Island 413 million years before the initial events of Homestuck.

The first meteor in Homestuck appears plummeting towards John's house not long after he starts playing Sburb with Rose. By biting into the Cruxite Apple, John manages to avoid its impact by transporting himself and his house to the Land of Wind and Shade. A similar meteor approaches each of the other kids' houses; Rose, Dave, and Jade also manage to enter The Medium prior to impact.

The Skaianet Laboratory has a terminal that monitors meteor impacts around the world. It shows a small meteor heading for the lab, timed for about three minutes in the future. Rose manages to escape destruction by transportalizing back to her house. The terminal also displays a large meteor that eventually falls in the place where Rose's house stood prior to her transporting it to The Medium by breaking her Cruxite Bottle.

The terminal also displays the two large meteors heading towards Dave's city and Jade's Island. The first strikes Dave's city but misses his house after being cut in half by Dave's Bro. Dave's house is transported to the Medium after his Cruxite Egg hatches. The largest of all the meteors targets Jade's Island and looms ominously above it at the end of Act 4.

Meteors' Relation to the Various Bases[]

The meteors seem to be connected to the Bases found by the Exiles in the year 2422.

Meteors' Connection to the Veil[]

Some meteors are the vessels inside of which the paradox clones of all of the Homestuck Kids and their Guardians originally arrive on Earth. Each of the kids and guardians are sent on a meteor along with a particular object: John with Colonel Sassacre's book, Rose with the Bunny that originally belonged to John, Dave with Maplehoof, Jade with the Bunny that belonged to Rose, Jane Egbert with Dad's hat, Jake Harley with the Pistols with which he accidentally killed Colonel Sassacre, Roxy Lalonde with Mutie, and Dirk Strider with Lil Cal.

The Frog Temple is also found on a meteor floating in The Veil. Bec, recently created by the Draconian Dignitary from the Paradox Ghost Imprint of Halley and a copy of Rose's MEOW journal, remains in the temple. This meteor is sent 413 million years in Earth's past to the area that becomes Jade's Island, delivering Bec and the "seed" that grows the temple on Earth.

Upon hitting the Earth, the meteor containing John produced a cloud of smoke above the impact. Likewise, Rose's meteor destroyed lots of marine life when it finally landed. Dave's and Jade's connections to their associated classical elements remain unknown.

The meteor over Jade's house appears to have been a special case. Being nearly the size of Australia, it is easily larger than any object in the incipisphere and could probably completely destroy Earth. This raises the question of why it was there, as the largest meteors come at the end of the Reckoning, meaning Skaia should not be able to teleport such a massive one.

The meteor was blown up by a prototyped Becquerel, saving Jade but creating an explosion of such magnitude that it decimated any and all remaining life on Earth. He likely blew it up rather than redirecting it because it was carrying the Bec Head Base.