The Midnight Crew have many weapons and objects that they use throughout their missions. All of these which have a playing card that relates to them. Much like Problem Sleuth's Weapon/Object Duality, the cards transform into the weapon at will. Each character has a deck of cards. Their deck of cards is similar to a sylladex, except it holds playing cards instead of Captchalogue Cards.

Spades Slick carries around his deck of cards which is the war chest that holds all of his objects. This chest is reminiscent of the chests that are in John, Jade, and Jane's bedrooms. Taped to the back is his vendetta itinerary of all the Felt members he plans to kill and his heist map. All of the items in this section belong to Spades Slick. 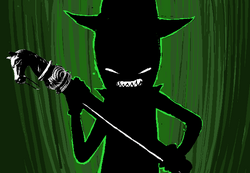 SS: Ride around on horse hitcher pretending to joust.

Spades Slick's weapon of choice. In the intermission it is seen in his first inventory slot. Its innocuous double is the Ace of Spades, as one might expect from Spades Slick's number one weapon. After Spades Slick tripped Itchy, he fell quickly to the might of the horse hitcher. Snowman later caught Spades Slick pretending the hitcher was a horse and using it to joust. He could not believe that she caught him horsing around

like that. Despite this, he later used the hitcher in the same fashion to skewer Stitch. Slick attempts to use it to bash in the head of Doc Scratch, but it fails to slay the first guardian. After Scratch gets tired of this senseless drubbing he takes the hitcher and bends it into a useless heap of iron. The new 'Pretzeled Horse Hitcher' appears in Openbound in a chest; when given to Hussie while crying in the middle of a crater, he will follow you.

Spades throws this small razor at Sawbuck and it turns into the playing card king of spades. The card stays lodged in Sawbuck.

This is Spades Slick's second favorite weapon. It is used to slay three Felt members at once. It is first seen in Spades's second inventory slot.

This switchblade is first seen in Spades's third inventory slot.

This weapon was shown in Spades Slick's inventory, slot 4.

These two dogs are Spades's prized possession, much like Problem Sleuth's candy corn.

This card was going to be used to open Karkat's base. However, Snowman shot a hole in the card, rendering the key useless.

This is Clubs Deuce's deck of cards. He keeps all of his items in this wardrobe which resemble's Jade's and Kanaya's Wardobifier. It does not seem to operate like a normal wardrobifier, and instead he opens it up to release his weapons. All of the items in this section belong to Clubs Deuce.

This is Clubs Deuce's weapon of choice. It is seen in his first inventory slot.

You flip the fuck out over the fact that this is apparently a BULL PENIS CANE.

Deuce commences to flip out when he discovers what nonsensical item he has been using. Everyone would flip the fuck out; even you would.

As much as it might sound like an outrageous item in keeping with the fantastical MS Paint Adventures style, taxedermied bull penis canes exist in the real world. Go ahead and flip the fuck out.

A golf club in Clubs Deuce's second inventory slot. He never gets a chance to use it.

Clubs Deuce puts this C4 under his hat, and many of the idiotic Felt members see this as a clever way to make them unable to attack him. Stitch​​ sees right through this ruse as C4 is a stable explosive and will not be triggered by gunfire.

Clubs Deuce, like many of the other Midnight Crew members, keeps a back-up hat with him at all times. Whether all backup hats are under jack of diamonds is unclear.

This is Diamonds Droog's deck of cards. He keeps all of his items in this mausoleum. It looks like Rose's Mausoleum for Jaspers. He has covered the entrance of his Brawlsoleum with a black velvet curtain. On the door is a row of his white ties. All of the items in this section belong to Diamonds Droog.

Diamonds Droog's weapon of choice, as its Innocuous Double is the Ace of Diamonds. It is seen in his first inventory slot. Its title also reflects his short temper, as Droog is known to lash out at his teammates

for no particular reason. The term "ultra-violence" is also a reference to a common phrase from A Clockwork Orange, the book which DD's name is somewhat inspired by.

Diamonds Droog keeps many guns in his possession. It would seem they all have an Innocuous Double that is Diamonds.

This radio is used by many of the members, Diamonds has one in his possession. It is created by combining a ten card and a four card, an obvious pun on the term "ten four".

This is Hearts Boxcars's deck of cards. It is a large bathtub covered in red hearts, resembling John's bath tub that was accidentally ripped from the floor by Rose. All of the items in this section belong to Hearts Boxcars.

This is Hearts Boxcars's weapon of choice. In the intermission it is seen in his first inventory slot.

These wax lips are Hearts Boxcars's most prized possession.

Much like Dave's shitty swords, Hearts Boxcars keeps many axes with him. They all seem to have the Innocuous Double of cards with hearts on them.

You pick up the 13 OF STARS card. What? Cards don't go up to thirteen. Stars ain't a real suit either. These guys really are a bunch of whackjobs.

Retrieved from "https://mspaintadventures.fandom.com/wiki/Midnight_Crew_Cards?oldid=216284"
Community content is available under CC-BY-SA unless otherwise noted.