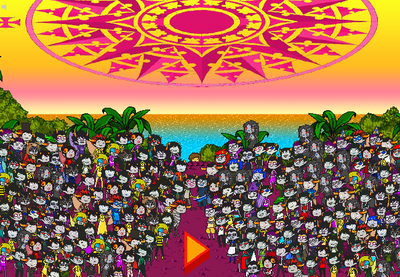 , is the last Flash of Act 6 Intermission 3, occurring slightly before the fall of the curtains. The ministrife serves as a finale to the Openbound games which were peppered throughout A6I3.

The Flash is technically interactive, but only insofar as the reader may advance the dialog of the scene. Unlike in Openbound, none of the characters can be controlled directly, nor are there environments to explore or puzzles to be solved. As it turns out, the "mini" in ministrife was an apt title after all.

An unofficial fan transcript is available here on Pastebin.

After much teasing of the reader from the narrative

, the ministrife opens with Vriska and Meenah running at each other, leading off from where the last Openbound game ended. Andrew Hussie passively watches the ensuing interaction, bobbing about in the background, unnoticed by all. Except for us.

Meenah asks Vriska to join her ghost army, but the latter dismisses the former and her plan to defeat Lord English as inferior, setting the seadweller off. The two quickly butt heads, trading insults with each other. Vriska calls over Tavros and John to "get a load of this chick". Meenah and John recognize each other from their previous meeting

, and she quickly ends his visit the same way she did before, to Tavros's vengeful delight, and Vriska's fury.

The cerulean bad girl takes the time to call out her fuchsia counterpart for blowing a lot of smoke without engaging in actual combat before shifting into her Thief of Light outfit in a rather flashy and dramatic transformation sequence. Meenah reluctantly follows suit, disgusted with her own Thief of Life costume. While Tavros searches desperately for the ring, Meenah modifes her uniform in a variety of ways, trying to find a cool look. Unimpressed, Vriska suggests she "take it to the next level," before demonstrating the trick, undergoing a Dragon Ball Z-esque brand of power increase through sequential transformation, or in other words accessing her Ancestral Awakening, though it's a move Meenah can't match.

Instead, Meenah calls for "backup" in the form of Aranea and convinces her to go god tier, though she refuses to fight. Vriska responds in kind by summoning Aradia, though the Maid of Time believes the gathering is a costume party. Since neither addition will participate in their battle, Meenah hollers for everyone in the vicinity to gather. This ends up not working out so well for them, since this not only barrelrolls way out of control as more and more ghosts pile in, but also leads mostly to a bunch of awkward interactions taking place in favor of an actual brawl.

The crowd of spirits grows to smothering magnitude, particularly as several doomed timeline copies of characters start to pile on, a few of which serve as references to popular memes from the fandom or non-MSPA media, as can be observed below. Even the text box cannot escape the overcrowding.

Soon fed up with all this nonsense, the girls at the epicenter agree to forget all the backup and just get on with their fight already. They stipulate that the crowd of ghosts that's gathered will go to the winner and serve their plan. Familiarly

, the flash comes to an end just as the combatants leap at one another. The scene shifts to a recreation of the events as depicted by Calliope, with her trollsona inserted into the situation.

Calliope's depiction of the ministrife is in fact

a panel in her fanfiction tome, which Caliborn defiles.

Tavros never finds the ring, because John somehow managed to keep it with him when he woke up.

, Vriska and Meenah appear to be working together, though the plan is mostly the same as what Vriska intended from the beginning. It is unclear which one actually won the fight, or if it was a draw. 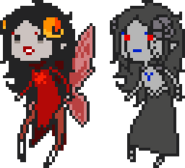