For the post-scratch version of this character, see the Ψiioniic / the Helmsman.

Replaces most of his letters with other symbols. This includes, but is not limited to, E=3, A=4, S=5, O=0, T=7, I=1 and B=8. Tends to make spelling errors. Occasionally makes sex-related puns, such as "5P0RN75". Also uses reaction images from time to time (The "You tried" star and his own gifs of himself).

Mituna Captor is the Heir of Doom and Sollux's dancestor. After a mysterious incident in which he is theorized by Aranea to have overexerted his psychics powers, he sustained brain damage which altered his personality and behavior. What happened to Mituna is unknown, as Kurloz, the only other person to witness the incident, is unable to communicate verbally.

The name Mituna was suggested by Archaemic for Sollux. It is short for Mithuna, the name for the Indian solar month corresponding to the sign of Gemini and a Sanskrit term for sexual union, which the Indian people thought the constellation resembled [citation needed]. The latter was presumably not the initial intention for naming him - although, considering his usual vocabulary, it is appropriate in a strange way. Mithuna is, in Hindu mythology, the most important of the five makara [citation needed], further tying him to Kurloz. The name Mituna also has a strange similarity with mizuna, which is a plant in the mustard family, which could link into the fact that Mituna is a (mustard) yellow blood.

Mituna was one of the players in the failed A1 Sgrub session, which took “three sweeps”

; it is unknown if Mituna ascended to god tier during this time, a fact which he himself seems uncertain of

. As with the rest of their team, he was killed by Meenah to ensure that they "survived" in the form of ghosts in the Furthest Ring instead of being completely wiped out by the scratch's reset. Aranea gives a short biography of him:

“The Heir of Doom was once a powerful psionic. [...] He had much to say when it came to warning us a8out the path of doom and destruction we were all headed for, 8ut no one took him very seriously. 8ut one day he lost all those abilities when he 8adly overexerted himself. It's hard to get any specifics from him, 8ut indications are that he applied every last 8it of energy he had toward some great act of heroism, saving us all from some looming threat. Not only did his exertion permanently 8urn out his psychic a8ilities, 8ut it left him somewhat... er. Incoherent. [...] The entire incident is shrouded in mystery. From his limited and scattered accounts of what happened, it seems very likely that Kurloz was with him at the time, as the only eye witness. And of course it's impossi8le to get any relia8le information out of him. I guess we may never know, sadly.”

Like his dancestor, Sollux, Mituna has a dual personality, which was either caused or worsened by the brain damage he suffers from. He alternates between an aggressive, abrasive mood, employing foul language such as anti-seadweller slurs when talking to Meenah and Cronus, and a meek, passive, apologetic self, in which he is too timid and chooses not to defend himself against Cronus' verbal bullying. He doesn't like being touched by strangers (or maybe just Cronus) and will completely freak out until they let go.

He occasionally goes through fits where he rapidly swaps between moods.

Mituna skateboards like his matesprit Latula. In order to counter his own clumsiness, he wears a bulky helmet with a dual-color visor reminiscent of Sollux's glasses. He also wears a tight yellow and black bodysuit that matches Latula's outfit. Under his helmet, he sports messy hair that covers his eyes. Mituna likes slam poetry, which he tried to show Cronus before he interrupted him by breaking his skateboard.

Mituna has been in a matespritship with Latula for eons, much to the confusion of Meenah. The two wear matching bodysuits and partake in similar "rad" interests, like gaming and skateboarding.

Mituna is in a moirallegiance with Kurloz, who is theorized by Aranea to have been the only witness to the incident which incapacitated Mituna; Cronus says there are rumors that Mituna is actually lucid and coherent only when talking to Kurloz, although these could be his chucklevoodoos.

Mituna is often bullied by Cronus. Cronus hints at one point that before Mituna's accident, the two were friends. Whether this is true or not, the two simply hate each other in the afterlife. 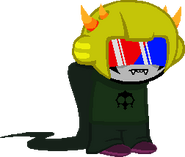