In Hiveswap, monsters are mysterious creatures of an unknown origin, a large number of which appear and begin to terrorize the inhabitants of Half-Harley Manor in Hiveswap: Act 1. Aggressive, eyeless, and with gaping green mouths, these creatures are generally antagonistic, albeit seemingly not very smart. Their origin, purpose, and the reasons why they seem so intent on attacking Joey, Jude, and their pets is unknown.

Monsters vary widely between a number of bizarre and seemingly nonsensical anatomical traits, such that this is one of their defining features. The monster's main body is generally an undifferentiated rounded blob of varying dimensions, featureless except for a (usually singular) gigantic mouth exposing lime green innards and bright white blunted teeth, in contrast to the matte black hide that covers the rest of the monster. Protruding from this body in an almost random manner are an array of limbs of a variety of different shapes and sizes - these include arms (with hands), legs (with feet) and odd tentacle-like protrusions. Generally, the monster has legs at its base, arms (if it has any arms) midway up its body, and tentacles near the top (almost as if the monster has hair), but this is far from universal. While some of these limbs are symmetrically placed on the monster's body, others may be very asymmetrical, with pairs of arms being different sizes, or an odd arm or other limb lacking a corresponding second limb on the other side of the body. Many of these limb placements seem redundant or ineffective - the monster that Joey fights in the Trophy Room has multiple pairs of legs, one of which is so tiny as to not reach the ground.

Some monsters have bat-like wings which allow them to fly - this is generally accompanied by a smaller body and few if any additional limbs. The monster that chases Joey and Jude out of their garden is yet still different, favouring a dramatically elongated, somewhat serpentine body, with many legs in the style of a centipede, transitioning to arms arranged in a similar manner towards its front. In this sense, monsters could perhaps be broadly sorted into having one of three body categories; flying, blob-like, and serpentine, although the variation between monsters is so broad that these may not be very distinct at all, and as-yet unseen monsters might somewhat straddle the gaps between these.

All monsters seen so far seem to be eyeless, lacking any orifices besides the mouth (which seemingly takes up most of the body). The large creature that Joey faces off against in her living room during the flare gun fight, on the left side of the screen, has a closed aperture in its body that has the appearance of a singular closed eye; however, this is actually a second mouth.

The motivations for the actions of the monsters, if they have any, are unknown, as are their origin and their ultimate nature. They seem to act aggressively towards all non-monsters that they encounter, or at least that they have encountered so far. They chase down Joey and Jude, and attack them if they get the opportunity, but are also seemingly unintelligent and can be fairly easily distracted, such as by shining a flashlight at them, or by baiting them with food.

The monsters do seem to be easily motivated with food, although it is unclear if their attacking humans is also motivated by this instinct. One of the monsters attacks and eats Frohike, suggesting a taste for meat, and another monster is lead away by feeding it dog treats. However, the monsters do not like all human foods, and Joey is able to defeat one by partially emptying a bottle of "spice mix" seasoning in its direction.

The monsters do not seem to have much intelligence or unifying purpose, other than that they all seem to be driven to attack Harley Manor. Jude comments much on their lack of tactical effectiveness or co-ordination, and yet on some level they all seem to be united towards a common goal or target. Perhaps they are being guided by some outside force, or perhaps Harley Manor is simply the only nearby location that contains living creatures for the monsters to attempt to consume.

In Hiveswap, the player (as Joey and Jude) confronts several monsters in Strife sequences. In line with Hiveswap's unique strife mechanics, these monsters are usually defeated in a variety non-directly-combative ways; either by Joey dancing past them in an abscond, distracting them with dog treats, peppering them with spices, or causing them to accidentally knock each other out in their own stupidity. 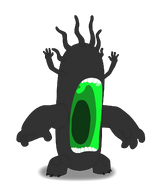 A monster with two sets of arms and scalp tentacles. 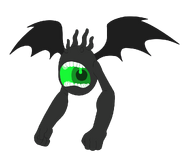 A winged monster in flight.

The two-mouthed monster with its second mouth open, belying the illusion that it could be an eye.

Retrieved from "https://mspaintadventures.fandom.com/wiki/Monster_(Hiveswap)?oldid=224413"
Community content is available under CC-BY-SA unless otherwise noted.