(==>) (5 pp.)
Motter Ataxia is an indigo blooded troll from Earth C, appearing in Homestuck^2: Beyond Canon.

His name seemingly derives from motor ataxia, a symptom of dysfunction of parts of the nervous system; it could also be a play on the terms "moderate" and "tax".

In Volume: Meat, he ran as Vice President alongside Jane Crocker. Appearing at her inauguration speech, he told the nearby inebriated and talkative Jake English to “Shhh!” 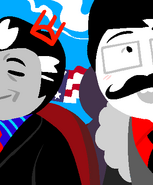 In a newspaper photo, concerned about President Crocker.
Community content is available under CC-BY-SA unless otherwise noted.
Advertisement