“You are accosted by a friendly MUTANT KITTEN.”

Jaspers - DNA source
Vodka Mutini (or Mutie for short), is a small, black, four-eyed kitten that Rose encountered in the Lab accessed from the tunnel beneath the grave of her former cat, Jaspers, in Act 3. After the lab's destruction, Rose took the kitten into her care.

Vodka Mutini is a portmanteau of the word mutant and the cocktail vodka martini. Given that Mom is hardly ever seen without some kind of alcoholic beverage in a martini glass, it's possible that Rose chose the name as a response to (or a parody of) her mother's apparent alcoholism. "Mutini" may also be a play on the word "mutiny", and the first syllable of the word is similar to the sound a kitten makes.

As a black kitten living in a lab connected to Jaspers' grave, Mutie is very likely a mutated paradox clone of Jaspers, made using ectobiology, or possibly the parent from which Jaspers originated, in some roundabout way.

Vodka Mutini is seen examining the Land of Light and Rain with Rose Lalonde during Act 4. When Alternate Future Rose's dream self ceases to exist on this page

, there is a Jaspers-like cat with four eyes next to her. This cat appears to be Mutie (or alternatively, a dream projection of Mutie), roughly 4 months and 13 days older.

When John enters the Land of Light and Rain and crashes through Rose's wall like nobody's business, he affectionately dubs Mutie 'Dr. Meowgon Spengler', a reference to Dr. Egon Spengler of Ghostbusters fame. John took the good doctor with him to the island ruins and then on into the Laboratory in the The Veil. In the lab, Meowgon fittingly played the important role of pressing the final button that ectobiologically created the four children. Mutie then chose to ride with Mom/Roxy on a meteor during the Reckoning.

It is unknown what happened to the original Mutie that Rose's mom landed on Earth with. Given that the older version of the cat from the doomed timeline had a different appearance, it is unlikely that the one Rose found was the same childhood pet of her mother, decades later.

After the scratch, it is revealed that Roxy cloned Jaspers (aka Frigglish) multiple times, resulting in many mutated cats similar to Mutie. Considering that Roxy traveled alongside Mutie when landing on Earth, it is strongly believed that her infatuation with dabbling in ectobiology was brought about by Mutie's existence. Mutie's face is also the logo on Roxy's shirt. Several of Roxy's cat clones are petrified and displayed

in her room. Roxy keeps these to throw into her Fenestrated plane, as test pilots before she jumps through herself. 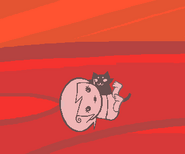 Mutie and Mom/Roxy on the meteor during the Reckoning

Dr. Meowgon with John in the lab in the Veil