Starts all sentences with :33 < and replaces double E's with 33, both to represent the two mouths of her lusus. Uses cat puns whenefur pawsible! :33

Land of Little Cubes and Tea

Nepeta: Consult with friend on the matter.

Nepeta: Give Tavros the bad news.

Nepeta Leijon, also known by her Trollian handle, “arsenicCatnip”, is one of the trolls. Her associated zodiac sign is Leo (♌) and she has horns shaped like cat ears.

Her quirk consists of preceding every line with “:33 <”. :3 is generally used as a smiley reminiscent of a cat face, while 33 is the atomic number of arsenic (as in her handle). She is most likely associated with arsenic because it is used as rat poison, because of the stereotype that cats don't like rats. It can also be used as green wallpaint, and it is linked with cancer which could be a reference to her crush on Karkat. “:33” also represents the face of her two-mouthed feline lusus. She occasionally changes these to form different facial expressions. She replaces syllables of words with feline-related homophones, such as “purrmission”

rather than "permission," "referring" and "pauses", respectively. Instances of double e's in a word, such as "sleepy", are replaced by double 3's (producing “sl33py”

), but she otherwise does not use letter substitution. She often describes actions in the third person surrounded by asterisks, a result of her constant roleplaying with other trolls.

Nepeta's name was suggested by Music Team member Tenebrais. Her first name is derived from the scientific genus of catnip and its active ingredient, and Leijon is taken from the surname of Anna-Greta Leijon, who was a Swedish Minister of Immigration in 1976 and victim of a kidnapping plot dubbed Operation Leo. The Swedish word lejon (of which "leijon" is an archaic spelling) means "lion", and is pronounced LAY-on.

she be on the Blue Team. After a cave-in

, her lusus dies and is prototyped into her sprite.

She is Aradia's server player and one of the few to know she is a ghost. Nepeta is seen with Equius

in the Land of Little Cubes and Tea (LOLCAT) and does not get much exposure of her session. After the battle with the Black King, the trolls made it to their Ultimate Reward before being suddenly interrupted by Jack.

Upon Jack's arrival Aradiabot transports the trolls to the meteor on which Karkat had created them, where they find a computer lab.

Nepeta's dream self is killed on Derse by Jack. Since then she spends most of her time with Equius, until the events of Equius: Seek the highb100d

. After witnessing the death of her moirail, she promptly executes a “pounceavenge”

on Gamzee who catches her hand mid-attack. He uses her claws to inflict three long scratches

across his face before dropping her on the ground and proceeding to walk towards her, as honks are heard in the background. She is beaten to death off screen, temporarily turning her into Schrödinger's Nepeta in which for several pages the story focuses on other characters until Terezi finds her body

Her body, along with the corpses of the other trolls, is preserved by Gamzee, and she is later revived as half of Fefetasprite, along with Feferi. After the sprite's fefetasplosion

, she returns to the afterlife with Feferi, staying

on Vriska's pirate ship until she departs

from the crew with Feferi and Sollux. When Vriska tries to protest, Meenah and Aranea remind her that she gave Nepeta a higher authority in the ranking on the ship, and has no power over Nepeta or Feferi. Vriska is distraught and not used to everyone defying her, and tries to oppose them, to no avail, as Nepeta continues to abscond.

before Davesprite shows up. The two greet each other with a handshake, and this causes him to tier 2 prototype her

, though not the dangerous kind that caused a certain debacle which hurt a couple of people. She has a naïve view of everything. She lives in a cave and hunts and eats animals, then occasionally wears their fur and paints with their blood. In fact, she uses this blood along with soot and ash to create wall art, such as storyboards for a comic and her shipping wall.

Nepeta seems to have a lot of similarities with Kanaya, which may or may not be significant. They (despite Hussie's noted lack of perfect analogues) have blood colors closer to jade than any of the other post-scratch trolls. Both of them are also green-blooded middle-caste trolls with friends on either side of the blood spectrum whose relationships they observe and moderate to some degree. (Kanaya is the meddler, and Nepeta keeps a shipping wall while being generally agreeable to everyone.) Nepeta was the one to see Aradia and Equius's kiss

, and Kanaya was the one to see Vriska kiss

a helpless Tavros. Although Kanaya reacted with shock (due to her mating fondness for Vriska), Nepeta just updated her shipping wall.

She held conversations with Terezi in which the two of them roleplayed.

Nepeta roleplays as a two-mouthed feline anthropomorph (similar to Jade's fascination with furry fandom). Her feline hunting roleplays are linked to her real-life routine.

Nepeta also has an interest in drawing comics on her walls depicting tales from her hunts, as well as stories involving her and her friends. One wall is her shipping wall, where she keeps track of potential and confirmed relationships between her friends (including herself). Once in the veil, she recreates her shipping wall to a larger scale

, but doesn't want to update it to accommodate the grisly developments of late.

, Nepeta's interest in shipping stems from her own loneliness as it makes her feel less alone. Shipping might have been a coping mechanism, since she lived isolated from other trolls and had an unrequited flushed crush. It's unknown how Jasprosesprite^2 knows about Nepeta's feelings, however Nepeta and Jaspersprite openly talked quite a few times

, and it is possible that Nepeta confessed it during these conversations.

Nepeta has a strong interest in various relationships. Her shipping wall hints strongly at red feelings toward Karkat, as the ship between the two has a “oh yessssss!” scrawled under it, but their relationship ends there, as there are no signs of reciprocity. The ship between Karkat and Vriska is underscored by an “oh nooooo”

. A large portrait of Karkat and Nepeta making out

is seen on her revised shipping wall followed by a large “OTP” (one true pairing). Upon inspecting this, Nepeta says “NO ONE MUST EVER S333333333333333333!”. Karkat, however, seems to be aware of these unrequited feelings, and has apparently been trying to avoid them for some time. He also seems to respect Nepeta and her red feelings. Nepeta's feelings for Karkat parallel those of her ancestor the Disciple with the Signless, Karkat's ancestor. It is implied that their relationship [“went beyond the four quadrants, transcending the grid entirely”]

. When she was spared by the E%ecutor, the Disciple hid in caves and used the blood of animals to write the scripture of the Sufferer from memory on the walls (which is possibly the origin of Nepeta's shipping wall).

After Nepeta's death a version of her is seen

with a god tier Karkat, and it seems she has finally found happiness with (a version of) Karkat. This is an allusion to her conversation

with Jaspersprite, where she surmises that she'll have to die in order to be happy with him.

Nepeta is Equius's moirail; she considers herself his pacifier and likes to calm him down. All of her conversations depict a sense of playfulness, and when interacting with Terezi she tries to pacify her rather than fight back. She insists on consulting Equius

before joining the red team; her procrastination in doing so leads one to believe she was well aware that he would refuse and insist on her joining the blue team. Regardless of their 'fighting' it is clear that they have a deep understanding of each other, that they care for each other quite a lot, and that they both truly believe that the other is “lucky to have me to k33p an eye on you”

with Tavros, it is hinted that Equius actually kept her from joining the Flarp session that caused several players severe injuries. In LOLCAT Nepeta seems very happy to see Equius and greets him with a friendly “pouncegreet!”

. Nepeta's moirallegiance with Equius may be based on the good compatibility between Leo and Sagittarius. During her first conversation with Terezi, she tells her that she’s “kind of scared of him”

Nepeta and Feferi seem to have bonded after they were fused into Fefetasprite, as well as mutually messing around in dream bubbles as the "joke ranks" of Vriska and Meenah's armada. They continue to behave as one person, indicating that they enjoyed being a single sprite and may want to carry on that way.

Nepeta is not particularly fond of Eridan, having said “if you are talking about mr ampurra, he has always given me the cr33ps anyway!”

. Eridan also states that she rejected him, despite his being her server player. However, when she heard of his death during her date

with Jasprosesprite^2, she said, “:33 < i mean... he could be kind of a jerk sometimes but that is still a shame :(( ”, which could mean that she still thought of him as a friend.

Nepeta is good friends with Terezi, and the two frequently roleplay together, although Terezi's RPing is meant “f4c3t1ously”

. It is hinted that Terezi may have red feelings for Nepeta.

She gets along with Tavros, though he has to pretend he's not allergic to cats in order to roleplay with her. She seems genuinely sorry she can't be his server player, and he seems to understand.

Nepeta seems to have been good friends with Aradia and is one of the few trolls to get along well with her after her death. As her server player, Nepeta is one of the first trolls to discover

that Aradia has, in fact, been dead the whole time.

She tries to interact friendly with Vriska and attempts roleplaying with her, but is usually put off by Vriska and her spidersona always doing “terrible things”

. She also tells Equius that she is “plenty scared of her”

In Alterniabound, Nepeta has stated that Jade is her favorite human and has tried to make friends with her, but Jade thought Nepeta was just teasing her. She decides to keep trying.

While there aren't any interactions between Dave and Nepeta that we see, in a conversation with Terezi, she calls Dave “akwete purrmusk” and says “he is pretty cute”

. It seems she and Dave had a friendly relationship where they would RP, but it is believed she had no romantic inclinations towards him.

Nepeta also enjoys talking to Jaspersprite, since he reminds Nepeta of her lusus. Jaspersprite is able to communicate with Nepeta through Rose's old laptop.

Nepeta's lusus, Pounce de Leon, is a small feline creature with two mouths, and is “pawssibly the cutest and purrhaps the bestest kitty you have ever s33n!”

. She and Nepeta often went on adventures together to search for the “FOUNTAIN OF CUTE”, taking turns riding each other.

Pounce de Leon was crushed when Nepeta's hive caved in

for unknown reasons, likely related to the meteor shower. Pounce de Leon's name is a reference to Juan Ponce de León, the Spanish explorer who discovered Florida while (supposedly) searching for the Fountain of Youth (though historians now dispute this). 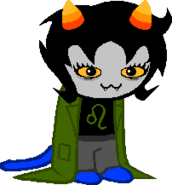 Nepeta without her hat. 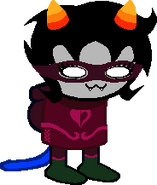 Nepeta drawn by Caliborn for Homosuck.