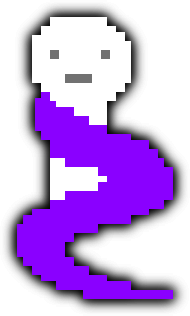 Nix is the name of Roxy Lalonde's browser of choice, and is also the name of the Denizen of her planet, the Land of Pyramids and Neon. Nix is likely the Denizen associated with Void, and thus presumably also Equius Zahhak's denizen in the Land of Caves and Silence.

In Greek mythology, Nyx is the primordial goddess of the night, and mother of Hemera. Appropriately, the icon for Nix is identical to Hemera's flipped horizontally, with the color changed to purple. The colors of the two (orange and purple) could also be reflective of the dichotomy between Prospit and Derse.

Following the events of GAME OVER, Roxy (at John's behest) visited her denizen in order to master her aspect, but was simply told to travel to John's planet. It's implied that she knew John's newfound ability would place his planet on an empty void and that Roxy joining him to the new timeline would allow her to master her Void powers.

The Greek goddess is typically spelt Nyx or Nox as opposed to Nix, the reason for the change is unknown, however there are various possible explanations for the change. The word "nix" is a synonym for "nothing" thus connecting to the Void aspect. Water spirits known as Nix, and occasionally as "Nyx", may also explain the change by helping connect the denizen to the sea monster that has served as the denizen for heroes of Light, Void's counterpart. Void also seems to have connections to water as well.