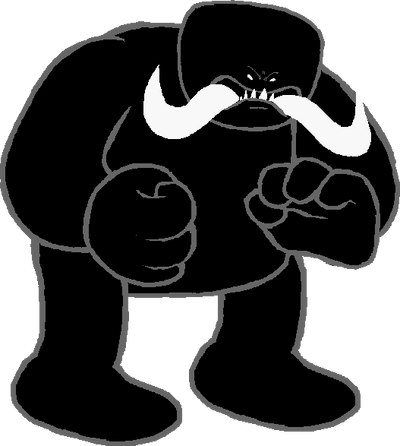 Ogres are the second enemy encountered in Homestuck. Although both are classified as Underlings, Ogres are much larger than Imps and sport a large pair of tusks. They begin scaling the cliff to John Egbert's house after he levels up several times, though they appear on Rose Lalonde's planet almost immediately.

Rose defeats her first Ogre with much more ease than John did. Regardless, Ogres are clearly stronger than Imps and are initially capable of nearly depleting John's health vial before he can respond with a single attack. They are also adept with weaponry, able to turn a tire swing and a large tome into effective weapons with ease. They seem to be more violent compared to the trickster Imps, preferring to openly attack the kids rather than just vandalizing their property.

John encounters two Crude Ogres as his first true boss fight in Sburb. These Ogres are black with white tusks. They are successfully destroyed by the combined efforts of John, Nannaquin, and Rose, dropping massive piles of Build Grist, Shale, Mercury, and Tar. Later, seven more are revealed. Before ascending through his First Gate, it is implied that John defeats all of them with his Telescopic Sassacrusher.

The first Lime Ogre is seen as an enemy of Rose in the Land of Light and Rain not long after she enters The Medium. The Ogre is light gray with black tusks, almost the opposite of the Crude Ogres. Some of its outfit is pink in association with her Eldritch Princess Prototyping. This Ogre is encountered as Rose wields her Knitting Needles, but she proves to be a more adept fighter using the knitting needles and yarn than John was with his hammer in his encounter with the Crude Ogres.

It is likely that Lime Ogres drop Lime or Limestone grist. 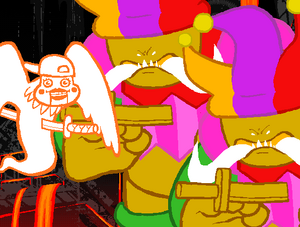 Sulfur Ogres are first seen when encountered by Alternate Future Dave in the Land of Heat and Clockwork. He slays them easily. They show evidence of his Seppucrow prototyping, as they have swords through their stomachs.

. They are the same colour as Amber Imps and have black tusks.

Several Ogres are seen in the troll's session. Orange Ogres were seen on Tavros Nitram's planet LOSAZ, light pink ones were seen on Nepeta Leijon's Planet LOLCAT, and dark red ones inhabit Terezi Pyrope's planet LOTAF. It can be assumed that the other planets feature Ogres as well, although we never see them.

Retrieved from "https://mspaintadventures.fandom.com/wiki/Ogre?oldid=224511"
Community content is available under CC-BY-SA unless otherwise noted.