The island pre-scratch, before Jade and Grandpa arrive.

about 150 miles southeast of Baker Island, USMOI and 50 miles north of Winslow Reef, Kiribati, is home to Jade Harley, Jake English and their guardians, as well as Earth's Forge. While it has no known official name, it has been 'affectionately' called Hellmurder Island.

, the layout of the island bears a resemblance to the area surrounding Kanaya's hive, the key difference being Kanaya's living in a desert while Jade lives surrounded by water.

The region that would become the island has been seen during many periods of time during the story. Its earliest shown date is when it is struck by a large meteor years in the past, but not many, a large basin fills up with lava, which later solidifies. It is within this basin that a giant, 7 floored, Frog Temple grows.[citation needed] Becquerel first arrived on Earth on the meteor carrying the Temple, and has presumably lived in the area since.[citation needed]

Though the post-scratch Earth's Frog Temple had different origins, and God Cat presumably originated on the island as well, most of its history seems to have been the same. As time passed and the sea level rose, the area became a vegetated island during the Cretaceous period.[citation needed] Pre-scratch, Jake Harley eventually arrived there with Jade on a ship of the same name

. Post-scratch, it eventually became home to Jade English and her grandson; however the presence of a population of lusii suggests the Condesce may have arrived in her “huge red space ark”

As Kanaya's identical home was grown from a seed

, it is likely Jade and Jake's homes were similarly grown using technology perhaps taken from the Frog Temple or acquired by Skaianet through other means.

Pre-scratch, Aimless Renegade resided in the area after arriving during the Reckoning.[citation needed] When Wayward Vagabond was dropped off here in his Skyship Base years later in 2422, all the water and vegetation had disappeared.[citation needed] The Frog Temple was shown to be weathered,[citation needed] and there was a crater where the volcano and Jade's home had used to be before being transported to The Medium. However the area also showed little signs of meteor damage thanks to Becsprite obliterating the incoming object centuries before.[citation needed]

, which also acted as a home to Gl'bgolyb or a creature remarkably like her. Given the Condesce's travel between Earth and her new kingdom on Derse, it is possible this structure surrounding the temple, which contained transportalisers between the two planets[citation needed], acted as some kind of port.

Jade's house on Earth, atop an island in the Pacific.

Due to Jade's interest in horticulture, a large garden atrium - where various vegetables and rather odd-looking flowers grow - is situated in the middle of the tower. Many floors above the atrium is Jade's Grandpa's laboratory and her bedroom. An incredibly long stairwell makes up the central column of the house, but there is a pedestal called the Transportalizer which can teleport people instantly to a certain floor.

Many of the lower floors are dedicated to the many things Jade's grandfather has collected on his travels, including big game trophies, valiant knights, decrepit mummies, and sun-bleached photographs of women stolen from the front windows of beauty parlors. On the bottom floor, the Transportalizer is blocked by the corpse of a minion of Typheus (previously seen as John's web browser), which may have been slain by Jade's grandfather at some point.

Three of the rooms have doorways that glow with colors inexplicably. It is worth noting that each of these colors correspond with three of the post-scratch Kids: Orange for Dirk, pink for Roxy, and cyan for Jane. This may or may not have something to do with weird plot shit.

The Grand Foyer is apparently where Jade's grandpa spends most of his time stewing in his own intensity and charisma. Jade must cross through to leave the house and feed Bec.

At the very top of Jade's tower is Grandpa Harley's lab, unused for years - presumably since his death. Inside are some Big Game Trophies, Valiant Knights, Decrepit Mummies, and more of Grandpa's Beauties. Grandpa's dog Halley sits stuffed on a pedestal, as is the family tradition, although his name is spelled "Harley" since Grandpa could never quite pronounce it correctly. Dream Jade's stuffed corpse is similarly stuffed and mounted. In the background is the fourth Fenestrated wall which Grandpa Harley evidently pilfered from Derse at some point. Though the wall isn't turned on, if it were on we could catch a glimpse of Andrew Hussie recapping the story so far.

Just below Jade's bedroom is a small chamber within the tower stem that hosts a Transportalizer and the box that houses her Dreambot. As Jade does not have a Transportalizer platform within her bedroom, this is the closest access she has to her room, requiring only one more flight of stairs.

Jade is first seen sleeping inside of her garden atrium. Situated near the middle of the tower, the atrium has large blue windows that allow sunlight in and help Jade's vegetables, fruits, and flowers grow. Speakers hanging in its corners transmit the sounds of Jade's Eclectic Bass solos, which the plants really seem to like. At the center of the atrium's four wings is a set of stairs, which Jade never uses, and her Transportalizer.

The trophy room, a few floors above the Grand Foyer, contains a number of Grandpa's Big Game Trophies, including two deer, a wolf, a shark, a warthog, a crocodile, and several strange mythological creatures. The floor has another Transportalizer platform. Jade doesn't spend much time in this room.

This room, below the Trophy Room, contains a wide variety of Valiant Knights Grandpa has collected in his travels, along with quite a few more Big Game Trophies - some the same in as the previous room and some new ones. A couple of shields are mounted on the wall, as well. For some reason the doorways away from it are glowing orange. There's no Transportalizer platform on this floor. Jade skips right past this one.

This room, in addition to more of the Big Game Trophies and Valiant Knights, contains an array of Decrepit Mummies in various states of decay, some in coffins, others exposed. The outward doorways glow pink this time. Jade doesn't delay here, either.

The penultimate room in Jade's descent through her tower, this room contains Grandpa's collection of Beauties, otherwise known as the "Daughters of Eclectica." The washed-out photos have spent at least 20 years bleaching in the front window of a beauty parlor, evidently a business of which Grandpa was a frequent customer. Jade doesn't get quite as excited about them as her Grandpa, though, and descends right on by this room. The room, of course, contains more Big Game Trophies, Valiant Knights, and Decrepit Mummies, and it doesn't appear to have a Transportalizer, although the middle of the floor is covered by the pelt of a gray wolf. The outward doors here glow in a light blue color.

The ground level of Jade's tower house, a somewhat larger room with doors leading out each of its four sides. They don't glow this time, but there are a pair of candle lamps beside each door. The path to the southeast leads to the Grand Foyer. There's a Transportalizer platform in the middle.

Are we forgetting something? 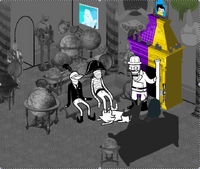 Jade's Grandpa spends most of his time in the Grand Foyer. For some reason, this room is always kept dark. In the room are an abundance of globes, as well as some mummies and armored knights. The Distinguished Houseguests sit on sofas on either side of a large fireplace colored in purple and gold, the tones of Derse and Prospit. Beside the fireplace are the mounted heads of two Basilisks, an Ogre, and another unknown minion that is likely another Dersite underling. A number of candles and a photo of Dream Jade sits at the top of the mantle, indicating that the fireplace is intended as a shrine to Jade's dream self. Jade Strifes with her (deceased and stuffed) Grandpa in front of the fireplace before heading outside to the rest of her island. Most of the contents of this room were warped into outer space by Becquerel before he prototyped himself into the Kernelsprite.

This house was destroyed by the Condesce after she assassinated Jade English, leaving only the two globes intact. Jake lives inside the globe containing his own bedroom - which on its own bears a striking resemblance to the residence

of another English - and keeps the lab globe in his sylladex.

The area surrounding where the home once was has been overrun by the growth of a certain orange gourd, and familiar “FRIGHTENING FAUNA” with an unfortunate “REALNESS ATTRIBUTE”

live across the island, including creatures similar to Karkat Vantas' crab lusus (only considerably larger

One of the frightening fauna