DO THE POTTED VEGETABLE INSTEAD. IT LOOKS DELICIOUS.

Pipe down, you. This is the editors' decision, not yours!
Either way, this page could probably be merged with Land of Wind and Shade. 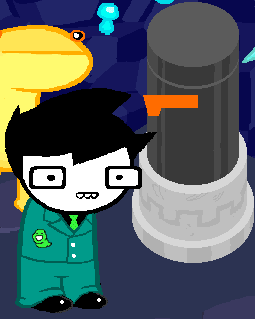 The Parcel Pyxis (plural: Parcel Pyxides) constitutes the Mail system in the Land of Wind and Shade. It is a series of tubes that runs throughout the land. The salamanders use these tubes to send various parcels to one another. It seems to work on a kind of honour system; Anyone is allowed to take anything that might come out of the Parcel Pyxis, and if someone needs a specific item they may carve their desired object on a Tablet and place it into a Pyxis, in the hope that someone else may see their message and will respond by dropping the requested item back into the Pyxis.

The Amphibious inhabitants think that the pipes that contain the parcel pyxis are sacred, most likely because wind blows through them and makes a sound which "bring(s) back fond memories of childhood". This phenomenon is referred as "The Breeze". Furthermore they seem to believe that The Breeze makes the pyxis work and any item found there is to be considered a gift from the Breeze.

If one were to find a tablet in the pyxis and possess the item carved to it, not to give that item to the parcel pyxis would be considered very impolite.

Retrieved from "https://mspaintadventures.fandom.com/wiki/Parcel_Pyxis?oldid=224255"
Community content is available under CC-BY-SA unless otherwise noted.