Wow Pesterquest Your Mom Lets You Have Two Fish ?

You're back on the beach, on the prowl for new friends while also hunting for random bits and bobs with a metal detector. Right as you contemplate your urgent need to obtain more money, you see a finned troll sitting sadly on the shore. You observe him silently for a few moments until he sighs and turns towards you. He asks whether you're the alien everyone has been talking about, then introduces himself.

His demeanor doesn't fill you with much confidence, but Eridan openly admits that he's not the best. To prove his point, he mentions that both his kismesis and moirail had recently dumped him, which is why he's so upset right now. Glad that he's giving you something to talk about, you are more than eager to be his friend. Eridan suddenly asks you to pay up, since he thinks letting someone see him wallow in misery is quality entertainment. Despite being irritated, you calmly tell him that you don't have any spare cash.

Eridan isn't the least bit concerned about your financial predicament, but asks that you accompany him on a friendly outing as an alternative way to settle your debt. He gets vaguely self-conscious with how desperate he's looking, but allows you to decide what to do for the night. While you're delighted with the freedom he's granted you, you're a little overwhelmed with what you can do.

You think about how brutality is a constant thing on Alternia, and ultimately decide that you're going to step up and do your part to make things right. After cataloging your strengths and many weaknesses, you conclude that your best shot at creating change is to go straight to the Alternian ruler. Your time on Alternia makes it evident that anyone ruling over this savage planet is probably the cruelest and heartless of the bunch, and your attempt to reform society may result in your painful and untimely death. 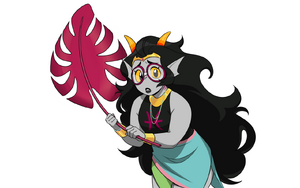 Feferi and MSPA Reader looking in the Crystal Ball