“Either way, I am beginning to perspire about it”

Proud that you've been able to make so many friends on Alternia, you wonder where you should go to evade the rising sun. However, you would rather spend time with someone less intense and mess around with your teleportation powers to see what sticks. Getting dejected with your inability to return home, you decide to visit someone Gamzee had once mentioned.

You appear right in front of Equius as he's sparring with a robot, startling the blueblood immensely. Not wanting to get punched in the face, you teleport to another part of his hive. Hearing a loud thunk from the room you'd just left makes you nervous, until a disgruntled sounding Equius asks that you show yourself. You weigh your options.

Strolling though a forest, you think about how your actions really can help your friends in the long run, especially those living on Alternia. Before your thoughts can get any more abysmal, you spot a treehouse in the distance. Then your vision goes black all of a sudden, leaving you quite confused. You aren't too thrilled with the prospect of someone addressing you as a criminal while you are tied to a chair in a dark room, so you try to zap away. When you are unable to extricate yourself from the current mess you've gotten into, you ask the troll what's with the getup. After a bit of banter, Terezi reveals herself and puts you right in the middle of her courtroom drama. She doesn't appreciate the way you keep interrupting her, and only gets more frustrated when someone starts pestering her the exact moment you decide to play along. While she's busy licking the screen of her computer, you contemplate the possibility of making an escape (sans your teleportation powers for the moment). 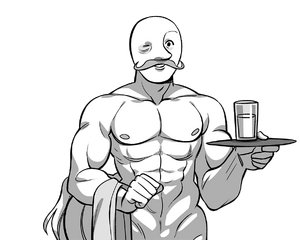