, as well as by Grandpa while his post-Scratch self, Jake, uses 2xPistolkind which consists of two pistols, one wielded in each hand. Jude Harley may be another user of pistolkind, as he equips and uses a flare gun. Doc Scratch is seen wielding a pistol, suggesting if he in fact wields a specibus, it would be pistolkind. Calliope also uses this kind abstratus, along with wandkind. Interestingly, her pistolkind abstratus is comprised of half of the symbol for 2x pistolkind.

This is a weapon used by many MS Paint Characters and readers alike. It is a weapon traditionally associated with the Land of Stumps and Dismay, usually utilized in tandem with the tree stump.

An incredibly dangerous set of weapons that both Grandpa and Jade Harley have been shown using as young children. Both of the times their use resulted in the death of a cherished guardian. This is exactly why babies should not be allowed

Hussie has made it clear these are the same pistols later found in Jade's room.

For the time loop to work out, it only makes sense if Grandpa obtained new ones while still alive and in possession of the old ones. He then brought the new pair to the medium, leaving them with his infant paradox clone. After his young self travelled to Earth via the reckoning, killed Sassacre with these pistols, and grew up, he eventually left these now-old pistols to Jade as he travelled to the medium. These were eventually responsible for his murder, and Jade retained them afterwards.

This firearm belongs to Calliope. Its innocuous double is the White Wand.

It greatly resembles the gun used by Doc Scratch, though it uses normal bullets rather than the cue ball bullet seen in [S] Cascade. Its holster in turn resembles the holster used by Scratch. They may be the same gun, although during A6I2, the magnum (said to be Doc Scratch's) and wand were separate objects.

Jake uses these pistols after spending some time in the void session. They are similar to his old pair, but gold, and with a slightly different shape. Their properties are currently unknown, although he seemed ready to fight off a skeletal basilisk with them. It should be noted that Lord English also wields similarly colored weaponry.

This pair of golden pistols is a reference to the Nicolas Cage movie Face/Off, in which a similar pair were used by the main character, Castor Troy. 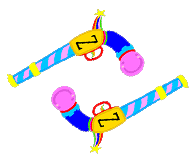 Currently being used by Jake. The Flintlocks of Zillyhau consist of one of the seven legendary weapons sets from cherubim folklore. Its namesake is the continent in which it was created. The pair is one of two of such weapon sets that consists of more than one weapon. Each was apparently hand crafted by the seniormost Artillery Hermit of the hallowed Schundermoist Caves, to be mounted in times of peace upon the Royal Burblemonk's personal Placard of Dwib. 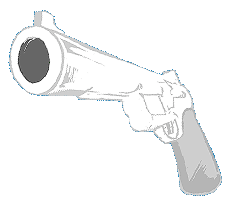 The deudly firearm that the enigmatic Doc Scratch holsters on his hip is an odd weapon. Instead of bullets, it fires a cue ball out of its large barrel. Spades Slick shot and killed Snowman with this gun. It eventually found its way into Andrew Hussie's ownership. He attempted to use it to defend himself from Lord English, but unfortunately found that it was out of ammunition. 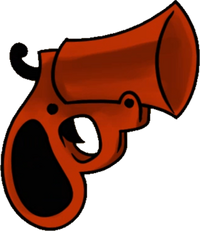 This flare gun is the only weapon equipped by Jude Harley in Hiveswap: Act 1, and is the source of his associated Abilitech. Although it is not canonically confirmed that Jude uses Pistolkind, his usage of this flare gun, even if accessed mainly via an Abilitech, would suggest this. The flare gun is used while Joey is fighting monsters in the living room of Half-Harley Manor. Jude fires it from his treehouse in order to get their attention. He loses it after he accidentally drops it as he attempts to fire it a third time, causing it to fall into a pile of leaves and start a small fire - which luckily is just as distracting to the monsters. The third shot has an added badass motion blur, which is interrupted by an act of clumsiness. This may imply that Jude aspires to be a good marksman just like his father.