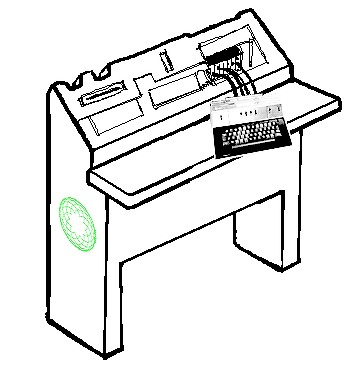 The Punch Designix is found within the Phernalia Registry, it appears to be based on an IBM 026 key punch with the keyboard of an IBM 029. John's stands in his study where the piano once did and cost four units of Shale to deploy, suggesting it's not meant to be deployed until its client reaches The Medium. However, Dave seems to have found a way around that.

It requires that the code on the back of a captchalogue card is entered. Once this is done, the card must be inserted into a slot so that it can be punched. A punched card can no longer function as a Captchalogue card but can be used in conjunction with the Totem Lathe to carve a Cruxite dowel. The Punch Designix has a captcha code itself of L229BXOG, and Dave and Jade were able to upgrade the Alchemiter with it negating the need for the Designix itself.

The relationship between a captcha code and the pattern on a card punched with that code is explained here.

Nerd fact: There are exactly 281,474,976,710,656 different possible captchalogue codes, as there are 64 different characters (0 to 9, A to Z (capitals), a to z (lowercase), and ! and ?) and 8 character spaces to work with. This also corresponds to their punch values, which have 48 bit values of punched/unpunched holes.

Punched cards are captchalogue cards that have been punched using the Punch Designix. The items stored in these cards can't be retrieved, but they can be duplicated using the other items from the Phernalia registry. Items can be combined by overlapping cards, thus obscuring some holes (like a bitwise AND operation) or by punching one card with both items' codes (like a bitwise OR operation). It appears that the operation used only determines which item used is the primary one, as seen with the Pogo Ride and the Sledgehammer; overlapping cards created a Pogo Hammer whereas double-punching a card made a Hammerhead Pogo Ride.

It appears that combining items rather than cards (i.e. drawing on a poster with crayon) still changes the item's code, similar to how the code would change if you simply combined the cards.

Retrieved from "https://mspaintadventures.fandom.com/wiki/Punch_Designix?oldid=241191"
Community content is available under CC-BY-SA unless otherwise noted.