his copy of the Sburb Beta. After it meets its demise, Jade prototypes it with Dave's kernelsprite which makes it become Crowsprite.

Dave refers to the crow as a "brainless feathery asshole". Alternate Future Dave once referred to the bird as "“Seppucrow”"

The name "Rambunctious Crow" is likely a reference to the "Spiteful Crow" in Earthbound; an early-game enemy with a frustrating penchant for stealing players' items. It also may reference the tome in the Prospit library.

The Rambunctious Crow is introduced when it flies through an open window and attempts to steal Dave Strider's copy of the Sburb Beta. When Dave yells at he bird to "STOP!", he accidentally launches his ninja sword towards the bird. It meets an untimely end when it gets skewered by the sword; sending it, the sword, and his copy of the Beta out his window and on to a lower rooftop

Dave's kernelsprite with the crow while she is asleep.

It appears the crow is one of many that live in Dave's city, as they watch Dave's battle with his Bro on the rooftop. Later, several rambunctious crows fly in through Dave's window and distract him while he tries to help Rose recover her Cruxite Bottle. This forces her to jump down a waterfall to retrieve it. 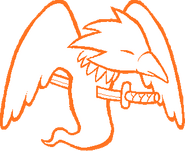