DO THE POTTED VEGETABLE INSTEAD. IT LOOKS DELICIOUS.

Pipe down, you. This is the editors' decision, not yours!
Either way, the strife technique pages could probably be merged together. 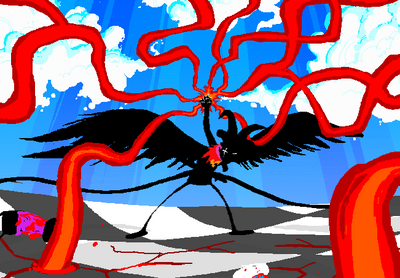 The Red Miles is an attack in Homestuck. It is performed through the Black Queen's Ring and has been used by Jack Noir and the Draconian Dignitary. It is an immensely powerful attack, capable of destroying buildings, planets, and even entire universes when combined with first guardian powers. Its name is another instance of the colors and units of distance naming theme. Since it is performed with the Black Queen's Ring, the attack's apparently unlimited range may also be a reference to the Queen having unlimited movement in chess.

Jack Noir used the Miles first on the battlefield, destroying both Derse and Prospit armies and a good portion of Skaia. After the fourth prototyping, Bec's powers allow him to change the color of the miles between red and green. These more powerful Green Miles he uses to destroy the trolls' session, starting with their twelve planets, and then their Prospit and Derse. During the events of [S] Cascade, the Red Miles kills the Genesis Frog in the trolls' Skaia. Jack's Miles are seen in the future post-scratch Earth, destroying Dirk's and Roxy's houses and killing Roxy.

The Red Miles are used by the Draconian Dignitary after he gets the Black Queen's Ring. He uses the Miles to try to kill Dirk's dream self, instead knocking both his dream self and real self out, and killing Jane.