Rockets are alchemized items seen with both the kids and the trolls. They are all bright red with yellow and orange flames going up the body and have a captchacode that is a variaton of “PCHOOOOO”. They emit a red flame and allow their owners to fly.

There appears to be no relation between the kids' and trolls' rocket stuff, although they look very similar. John originally provides the trolls with the code for the non-functional version of his Rocket Pack, so it's possible that the trolls acquired their rocket gear prior to this event through time shenanigans. 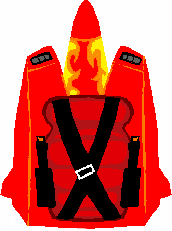 John's Rocket Pack is what you would expect a jet pack to look like, except with rockets. There is a large rocket for thrust in the middle, and a smaller one on either side for thrust and steering. It has two joysticks on each side for the user to grasp and (supposedly) steer. It has two diagonal straps that cross over the users chest, so it rests on the waist and shoulders while the back is supported by the padded backing. It is created when John mashes random buttons on the keyboard of the Punch Designix to see what happens, although a violin, cinderblock, and potted plant are embedded inside of it, rendering it inoperable. Terezi has Sollux extract the extraneous items to produce the captcha code for an unadulterated version. It is currently unknown how much it costs to make, but it may be as inexpensive as the broken pack (4 build grist and 8 shale) or it may cost more since it was functional.

Bro's Rocket Board is his mode of transportation. It may have been alchemized by one of the kids and sent to Bro through time shenanigans. Just before Dave enters The Medium, the board catches him as he falls from the rooftop of his apartment building. On Derse, the board catches Dream Lil Cal after he is thrown out the window of Dave's dream room and then flies onto a Transportalizer that leads to the ectobiology lab. The Authority Regulator ties John to the board with caution tape and sends him away from the lab as The Reckoning begins. It is shown to be quite durable, capable of flight after crash landing on LOWAS. It is seen at Dirk's room on the post-scratch universe, and he later uses its flight capabilities to do a variety of necessary things during his unification

Vriska's Rocketboots are first shown when she decides to help Tavros reach his first gate instead of making him crawl up all the stairs she builds around his hive. She retrieves the boots from one of her caves which holds all of her other treasure from playing Flarp. Eventually, when she tricks Tavros into joining her on her planet, she uses the boots to travel around with Tavros. After her death, she also uses them to fly around in a dream bubble as shown in this page

Tavros' Rocket Car is created from combining Vriska's Rocket Boots and his wheelchair. He uses the car to travel with all of his minions throughout the land, which would have been nearly impossible otherwise since wheels and sand don't go very well together.

Gamzee's Unireal Air, a rocket unicycle, is first seen lying beside him while he chats with Eridan from the Land of Tents and Mirth. It still has a wheel attached to it, which makes the device seem ridiculous and redundant, especially since his feet still wouldn't be able to reach the pedals. Unfortunately, he is never seen using it. 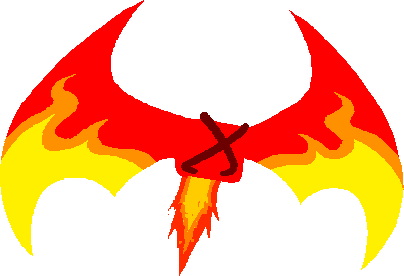 Terezi is seen using her Rocket Wings to fly up the side of her house towards Skaia. It is implied in Alterniabound that the Captcha code for them is “PSWOOOOP”. In contrast, the sound effect on this page

She later uses them to fly to LOPAN after the events of GAME OVER, where they are destroyed in her crash landing

Jade alchemized the Iron Lass suit by combining her clothes with the Iron Man armor. Much like the component used to create the outfit, her Iron Lass suit grants her the ability to fly using her rocket shoes.

A gas mask to withstand the gasses on the Land of Tombs and Krypton that is stylized with the same flames and hot colors as most of the other Rockets. Whether this accessory is actually capable of flight somehow and can truly be considered a rocket is unknown.

These shoes, given to him by Vriska, have a similar pattern to all the other items, but are probably incapable of actual flight.

Used (and named) by the now-cyborized Spades Slick.

Retrieved from "https://mspaintadventures.fandom.com/wiki/Rocket?oldid=244091"
Community content is available under CC-BY-SA unless otherwise noted.