Rose Lalonde
Mom
The home of Rose and her mother. Money doesn't seem to be an object with the Lalondes; their artistically angular house is a modernist architectural marvel, apparently inspired by Frank Lloyd Wright's Fallingwater and Le Corbusier & Pierre Jeanneret's Villa Savoye. The Lalonde household is situated on Rainbow Falls, a waterfall in Adirondack State Park in New York. The nearest large town is Potsdam, NY, less than 40 minutes away

. Along with a main house, there's also an Observatory and a Mausoleum built for the late cat Jaspers, the family pet. Save for the many paintings and statues of wizards, the interior design of the house is just as elegant and rich as the exterior.

The forest around Rose's house is lit ablaze by the meteor shower at the start of Sburb. With Dave's help, Rose is able to enter the Medium in time to escape the fire and the large meteor heading for her house.

Next door to the house is a large laboratory, which appears to be cut off from Rose by the blaze. 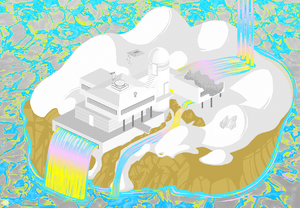 When Rose enters the Medium, her house is transported into the Land of Light and Rain, the second planet introduced in the Incipisphere. There is a plethora of white dust covering her house, in the same manner as John's house is littered with oil. Her home now resides upon a literal "Rainbow Fall" as the planet's water shines various colors. Unlike John's house, Rose's house is very close to the surface of the planet to which she was teleported and is possibly floating on an ocean.

Later, in the year 2422, the Wayward Vagabond finds himself at a laboratory at the exact location where Rose's house stood.

When John flies up through the second gate

in the LOWAS and flies straight down from LOLAR's second gate, he crashes through Rose's bedroom wall and breaks her Totem Lathe.

The house was apparently destroyed after the events that occurred in the GAME OVER flash.

What Rose believes to be her Mom's Room. The room is on the second floor and consists of an incredibly well stocked bar and a Transportalizer leading to the nearby Laboratory. Apparently Rose's Mother does not sleep or keep any of her things here. It is possible that the childish bedroom seen in the lab is where Ms. Lalonde sleeps at night. Rose has never been in here before, similar to how John enters his Father's room for the first time during Homestuck.

Unfortunately, Rose has no time to explore the room before a meteor strikes the laboratory nearby. Notably, the room remains damaged after the house is taken to the Medium.

The Lalonde's hallway could be called a gallery in more than one sense. On the one hand it has many exquisite artworks of wizards on display, on the other hand it is passageway along an upper story on the interior of a large building. It connects most of the rooms. 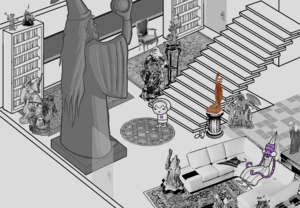 The living room in Rose's house is decorated with bookshelves, expensive rugs, a bronzed vacuum cleaner, and - naturally - the omnipresent Wizards Mom collects, including a twenty foot tall granite statue named 'Zazzerpan the Learned'. The Eldritch Princess doll is found sitting on the couch.

Because the house is built on a waterfall, the sound of water rushing under the floor of the room is constantly heard.

Dave uses Zazzerpan to smash open Rose's Cruxtruder. Similarly, the Eldritch Princess doll is used, along with Jaspers, to prototype Rose's Kernelsprite, so it is no longer in the living room. 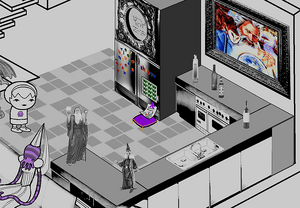 The kitchen in Rose's house contains a refrigerator, an oven, a dishwasher, a kitchen sink, and - of course - Mom's impressive alcohol supply and collection of wizards. However, it appears to lack any sort of distinguishable cooktop.

Much like John's, Rose's fridge bears a piece of cherished artwork (a childhood drawing of her late cat Jaspers) which was mounted there out of parental pride. However, unlike John's Dad, Rose's Mom went ironically over-the-top in connecting the artwork to the fridge, spending $15,000 on a frame and having it welded directly to the freezer door. Whether this is in fact a bit of ironic one-upsmanship or actual pride and caring on her part remains to be seen. On the bottom right of the fridge, Rose spelled the word "shrew" in magnetic letters but substituted two v's for the w missing from the set. Mom bought a whole pack of w's, one of which Rose uses as a moustache

in an uncharacteristic act of frivolity. The note, created by Rose as a sign of her thanks and signed in blood, and pillow placed below the note by Mom are part of Rose's ongoing Strife with her Mom.

An astronomical observatory is perched at the top of a tower in the middle of the Lalonde house. Rose retreats to the observatory to attempt to connect to a wireless signal originating from the Skaianet Laboratory. She also observes the meteor storm from there. Dave later adds a door to the observatory that leads to the roof, where he placed her Alchemiter.

The Mausoleum was built by Mom to house Jaspers after his death. Rose uses it to take shelter from the rain, as well as the fire encroaching on her house, so she can use the back up generator kept behind it after the house's power is cut.

The Mausoleum was built over a secret passageway which leads to the Skaianet Laboratory. The passageway is opened up by Rose's Mother, allowing Rose access to the lab.

Only the base of the Mausoleum is transported to the Medium with Rose. Rose follows footprints to it and down into another secret tunnel. The tunnel continues until reaching a pier where a lone martini stands, indicating that Rose's Mother left the house.

Retrieved from "https://mspaintadventures.fandom.com/wiki/Rose%27s_house?oldid=241956"
Community content is available under CC-BY-SA unless otherwise noted.