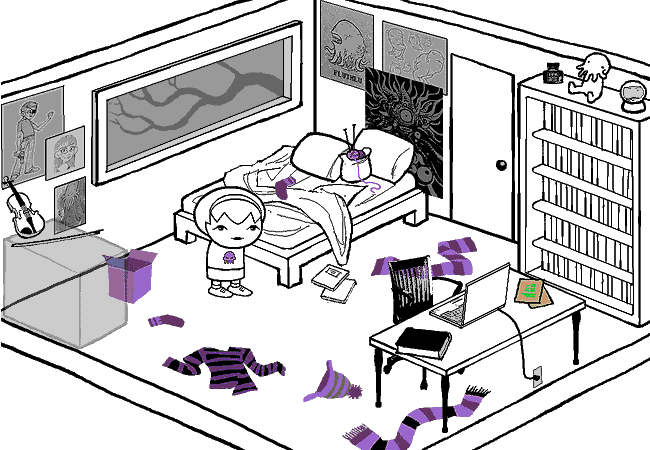 Rose Lalonde's bedroom in her house is the location in Homestuck where she is first introduced in person. Rose spends most of her time here so she can avoid her Mom. The room is not very orderly (possibly suggesting another passive-aggressive assertation toward her guardian): the bed is not made, clothes and knitting paraphernelia are strewn about, and various other things positioned haphazardly. Scattered around the room are purple clothes that Rose knitted herself. Her bookshelf holds various tomes of obscure literature. On the bookshelf is a cuddly Fluthlu doll, a bottle of the Ink of Squid Pro Quo and a snow globe. The walls are covered in posters of Fluthlu, beasts and other zoologically dubious Lovecraftian horrors. On her desk is her laptop which she uses to pester her chums and play Sburb. Her violin is sitting on her cabinet. On the wall is a character from one of Andrew Hussie's unfinished works, Wizardy Herbert. According to Hussie, "Herbert is the guy with the eye patch. He had a magic gun. But he could never figure out how to use magic, so he primarily just went around shooting things." The other poster right near it is a portrait of Beatrix.

Visible outside of her window are both Jaspers' Mausoleum and a nearby laboratory.

Dave Strider places a Totem Lathe in this room and throws Rose's bed into the inferno outside to make room for it, much to her dismay. After Rose enters the Medium, the window and most of the wall around it are destroyed when John crashes his Rocket Pack into her house.

Rose subconsciously wrote derivatives of "MEOW" across all of her walls, a fact she is unaware of until her dream self awakes on Derse.