For the post-scratch version of this character, see the Summoner.
Not to be confused with Rufio.

no cap1tal1zat1on except for EMPHAS1S... replaces "i" with 1... uses ell1pses frequently... followed by a space, and always in threes. Calls all girls "doll." Says "bangarang" when excited. Censors self when using profanity (e.g: "crazy sh*t.") Uses braces in emotes to represent his horns, e.g: }:)

Brave and the Bronze  ♫

Rufioh Nitram is the Rogue of Breath and the dancestor of Tavros.

Not much is known about him, apart from what has been exposited in Openbound.

His name is a reference to the chant of the character Rufio's name in the movie Hook ("Ru! Fi! Ohhhhh!"). Or it may just be the simplest way to spell "Rufio" with six letters.

Much like his dancestor Tavros, Rufioh is a fan of Fiduspawn. According to Meenah, he was born with his wings (or rather, sprouted them upon “puperty” [sic]

i.e. pupation). Rufioh calls himself a “m*tant” for it, and according to Aranea, he was an outcast due to it as well. For these reasons, Rufioh admits that he does not have high self-esteem, or not nearly as high as those around him think he does. To avoid the unwanted and negative attention, he went to live in the wooden village, with tree huts and rope ladders, with people who would accept him, known as the "Lost Weeaboos". Or as Rufioh put it, he followed his lusus into the woods instead, where he met Damara and presumably Horuss as well.

He was romantically linked with Damara, as well as Horuss at the same time (albeit in secret). Finally, Rufioh broke off his matespritship with Damara, who eventually turned to tormenting him. Rufioh mentions to Meenah one instance in his matespritship with Damara where she left him unable to walk or move, and was so injured that Horuss had to build him a temporary mechanical body (shaped like a horse). This is a callback to Equius stating he wanted to give Tavros a “hooven quadrupedal lower torso” in Alterniabound

When asked about how he got his normal body back, Rufioh mentions that it involved Horuss kissing his head back to life, “probably stand1ng on some mounta1n.”

During his team's session of the game, he did not ascend to god tier, finding the prospect of killing himself too heavy to face.

His mutation made him an outcast, though. To avoid the unwanted attention his wings would 8ring him, he took refuge in the forest among those who welcomed his differences, and learned their ways.
The Lost Weea8oos was a guild of youthful tree-dwelling troll otakus with zeal for fisticuffs, flight, and various forms of exotic eastern theater. 8ane to the enemies of hijinks, scourge to the seafaring classes who...
NOP-E
NOT LISFININ TO T)(IS LA LA LA GLUB GLUB GLUB
centuries of feuding with the Kemonomimi tri8es (GLU8 GLU8 GLU8 LA LA LA LA GLU8 GLU8 GLU8) ceremonial torchlight yaoi festivals (LA LA LA LA GLU8 GLU8 LA LA LA) tsundere quadrant vacillation (GLUUUUU8 GLU8GLU8GUL8GLU8 GLUUUUUUUUU8) threw down a daggerlance to challenge the guild's high seme for dominance (NO NO NO NO NO NO NO NO NO NO) ultimately served like a shonen on Shitsuji Island.

Rufioh is exceptionally easygoing and friendly. He sometimes uses terms that he knows Kankri would find offensive, but says that they are merely “regular words”

. He seems to enjoy being on good terms with most everyone, enough that he struggles to break up with Horuss because of the reaction he may get. It is noteworthy, however, that he is able to tell Damara that she won't get another chance with him. It is also suggested that he's a pushover of sorts, and has a hard time saying no. He admits to being somewhat cowardly, as he often avoids conflicts of the emotional or physical kind. He can also be seflish, as he had a red relationship with Horuss while being Damara's matesprit, and he also flirts with an Aradia Megido#Hivebent while Horuss is nearby.

He enjoys “troll an1me”, card games, and other hobbies of the Lost Weeaboos, the group he joined upon fleeing to the woods.

Rufioh, according to Aranea, was the most romantically successful and pursued of their party. He was in a matespritship with Damara, but she became jealous when Horuss attempted to “mack on h1m”

. The two of them had an illicit, secret relationship under Damara's nose, and Horuss began to change some of his views on dating someone lower on the hemospectrum. After ending his relationship with Damara, Rufioh began a formal, on and off matespritship with Horuss, which he tries to end. It can be interpreted that this relationship is emotionally abusive on Horuss' end, in very subtle ways (e.g. not ever letting him get a word in and ignoring the fact that Rufioh tries to break up with him), although it's possible that the perceived abusiveness is simply an unintentional consequence of Rufioh's unassertiveness and Horuss' obliviousness. In Ministrife, Rufioh is seen flirting with Aradiabot, much to Equius' chagrin.

He isn't the best with his romantic partners, as he openly avoids Horuss and flirts with an Aradiabot, and he doesn't put a lot of stock into his cheating affecting Damara's emotional state, indicating some degree of selfish desire on his end. Despite such, both continue to harbor positive feelings towards him and are generally on friendly terms.

According to Rufioh, Meenah is the only one of his 11 friends who hadn't made a move on him (as of Openbound).

While speaking to Meenah, Rufioh mentions an “orange guy” attempting to kiss him. This is possibly a reference to a previous scene in act 5

which spoofed Rufio's death in Hook. Andrew Hussie (dressed as Pupa Pan) unsuccessfully attempted to restore Rufio to life by kissing him. 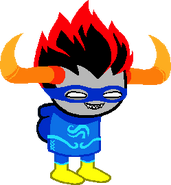 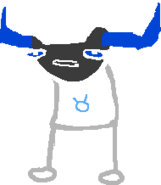