Land of Wind and Shade

Entrance of the Salamanders ♫
Salamanders are the indigenous people of the Land of Wind and Shade. They are yellow in color and tend to blow bubbles when excited. They are the Consorts of the land, making them a target for the forces of evil. They also played this role in the Land of Crypts and Helium, however, they had died out long before the players arrived.

Their lifespan is probably not sizeable, or at the very least they mature quickly, as one salamander in [S] ACT 4 ==>

states that the sound of the breeze blowing over pipes takes him back to his childhood, only to qualify this by saying it was merely a couple days ago. This caused some fans to speculate that the Casey that was shown on the Battleship might actually be a different salamander that John kidnapped adopted after the original's death. Hussie later dismisses

this fact, but the bigger lifespan than usual might only apply to Viceroy Bubbles Von Salamancer, especially on account of the salamander's apparently successful

use of dark magic.

He wears a hat which just recently appeared

in the Land, and claims he has "dishonoured his ancestors beyond comprehension with this frivolous accessory." His fashion statement becomes a trend, the more rumpled headgear considered higher in quality and price. Crumplehat is seen again when John plays the breeze

He wears John Egbert's bedsheets as wizard robes. He insists that you must behold his robes

. He later creates a highly successful cult. Its success is primarily because anyone can join. The members of this cult later were seen to be near Rose Lalonde right before she went grimdark.

He is seen farmin' goddamn turquoise mushrooms. He doesn't seem to enjoy his job as he calls it a fuckin' pain in the ass. But someone's gotta be farmin' those goddamn fuckin' mushrooms.

A young Amphibian to whom John gives his Bunny in an homage to Con Air. She is taken from her homeland by John and relocated to the Land of Light and Rain. When Rose meets Casey, she calls "him" Viceroy Bubbles Von Salamancer. The Viceroy now possesses an Eldritch Plush version of himself and some sweet new duds, including a robe to wear.

In Homestuck: Act 6 Intermission 5, Casey briefly gets their own subplot before Vriska intervenes and steals the limelight.

The Salamanders use an underground pipe network called the Parcel Pyxis as a means of trade. To obtain something, one inserts a carved stone tablet depicting the desired item into a mailbox-like pipe and waits for someone with this item to comply. If you open a pipe and find something already in it, it is considered a gift from the Breeze, and you are obligated to take it. However, if you open a pipe, and find a chiseled tablet, it is considered only polite to drop the requested item in the Pyxis.

On top of this, Boondollars are used. John is offered 1 boondollar for his suit as a scam, and 5,000,000 boondollars are asked of him for a harlequin figurine "From Skaia".

The salamanders of LOWAS use large pipes as a base element in their houses. All windows are circular. The houses have a roof possibly made out of tree logs.

The salamanders of LOCAH built gray stone crypts for themselves after their Denizen told them they would not live to see the day of their player's arrival. They also seem to have been able to built dams and their architecture features several complex puzzles, making them seemingly more advanced when compared to the LOWAS salamanders.

LOWAS Salamanders believe the Pipes to be sacred, and say that "The Breeze" flows through them, allowing their Land to breathe, though Typheus has recently afflicted it with sludge.

Frog-shaped statues or idols have been erected all over the Land, though recently they have been desecrated by the Imps.

The amphibians have been waiting for someone known as "The Heir" (John) to save them and restore balance to their Land.

The salamanders of LOCAH had similar myths surrounding "The Maid" (Jane), although they were eventually informed by Hemera that The Maid would not come within their life time, and that they should stop preparing for such, which consequently changed their myths and tales, naming her no longer a "Hero," but a "Noble," a title "reserved for martyrs or tragic figures who toil in futility," merely paving the way for the coming "Gods" who would be the ones to raise the Speaker of the Vast Croak and fight an Invincible Demon.

They also cultivated large, sacred seed pods that grew into balloon-like objects, filled with helium and water as ballast, with hopes that as they release said water back onto the landscape they will eventually float up to Skaia, and believed that a wish carved on a seedpod that completed the journey would come true. These balloon plants also supply the planet with the Life-giving water that sustained the once-thriving ecosystem.

Clan of the Secret Wizard[] 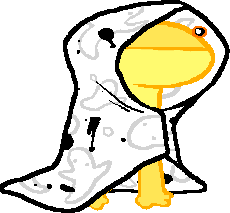 “Where is your Rag of Souls? You look absolute ridiculous. Our secret society beholds you as foolish.”

The Clan of the Secret Wizard is group of LOWAS salamanders who wear a cloth known as the Rag of Souls or John's bed sheets and consider them as divine relics. The most important part of this cult is the beholding of robes.

The cult started when the magnificent Secret Wizard was graced with

the oily First Rag of Souls from the clouds. He put it on, and became a humble beggar. One day he “beheld a great pillar of rock, and on that pillar he beheld an impossibly tall white tower belonging to the Heir of Breath”.

In the tower he found the Heir's blue servant who laundered the rag and so the Rag of Souls was born anew. Secret Wizard then alchemized multiple copies of the holy cloth with the Heavenly Machina so that others might be beheld with admiration as well.

The Cult is known to have insane amounts of the Rag of Souls, even so that they even abduct new members while they are asleep, and with no knowledge of their qualifications. Even while this is true, the holy rags are appreciated above all. When John called them “stupid bedsheets”, it was described to be “unthinkable blasphemy”. Beholding of robes is taken really seriously by most members of the Cult, and many beg for John to do this. It is implied that this causes the peace to behold you as you behold the rag. A certain degree of admiration is connected as well.

The other original Rag of Souls, that which came from John's bed on Prospit, is seen drifting from the heavens onto the Warweary Villein after Jack Noir destroyed the moon housing John's room. It is identical to John's real blanket, though is not imp oil-covered, and was in use by the Wizardly Vassal, who chose to clothe himself in it up until some time before 2422, though he may actually still be wearing it now, the sheets stained gray with 413 years of age and dust.

Once, the LOWAS amphibians lived peacefully, but right before John starts his adventure the Agents and John's Denizen, Typheus, pollutes the Land of Wind and Shade with black sludge and traps the Fireflies under the clouds. Since then, Imps of varying kinds continue to cause chaos throughout the Land.

In act 4, a village is attacked by three Imps, two Tar Basilisks, and a Copper Giclops. As John arrives he tries - unsuccessfully - to kill the enemies.

A mysterious stranger appears and uses a rifle to kill the two Tar Basilisks and injure the Copper Giclops. He then leaves, carrying the old version of Colonel Sassacre's Daunting Text of Magical Frivolity and Practical Japery.

John attempts to put out the fire with the Betty Crocker Barbasol Bomb but only manages to increase the flames.

Conveniently a convenient wind conveniently puts out the flames. How convenient! The amphibians are happy to celebrate John as their savior, though they are not aware that he is the fabled Heir. Green fire later spreads across the planet and kills countless Salamanders. The brave Rocketpack firemen attempt to quench the blaze with shaving cream, not knowing that it was so damn flammable. Many heroes perished before the Heir unleashed his power, saved their lives, and gave them all their first view of the sky in ages.

The LOCAH herpetological populace spent their years waiting for the Hero of the Land to appear. Upon awareness that none would survive to witness her debut, only their Denizen and her asleep, they changed to puzzle-filled crypt building, tablet carving, and at least one instance of fanfiction, as well as ceased their balloon pod farming. 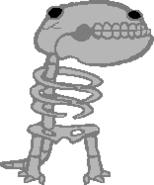