Prior to his first appearance, pictures of him appear on a screen in Dirk's room in the Flash [S] RAP OFF!!!!!!!!!!

. Even further back, a poster of him and Squarewave can be seen in Dave's room. He looks kind of like he's Squarewave's chill older bro.

when Dirk is fighting the Imperial Drones on his rooftop. It is shown

that underneath his hooded cape, he keeps two rocket launchers. He then meets up with Squarewave on the roof.

When the Red Miles attacks Earth and kills Roxy, Dirk flies to her house and brings Squarewave with him. Sawtooth is left behind to begin the entry process so Dirk's house can enter the Medium. 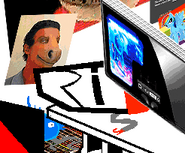 Sawtooth and Dirk after they defeat the Drones
Community content is available under CC-BY-SA unless otherwise noted.
Advertisement