Karkat using the strife specibus sicklekind is possibly a reference to the ruling planet of Cancer, his associated zodiac sign, the moon, which takes the form of a sickle when crescent.

Karkat likes to think he looks really really cool practicing in his room with his Sickle, but actually he looks like kind of a doofus. The most lethal members of troll society, the threshecutioners (of which Karkat is an aspiring member), are also known to use sickles.

Karkat alchemizes his sickle with a Regisword to produce some sort of Regisickle. The weapon is only seen once

, though it has been seen in a dream bubble chest in Openbound: Part 2, where the name was officially revealed. 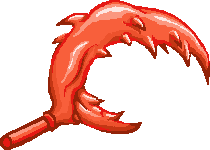 The Clawsickle, resembling a large red crab's claw, joins Karkat's arsenal as he travels across his land with Jack and Terezi. Its red color and squishy appearance may come from one of the beating hearts seen in the Land of Pulse and Haze, or is a reference to Karkat's astrological sign Cancer, meaning "Crab."