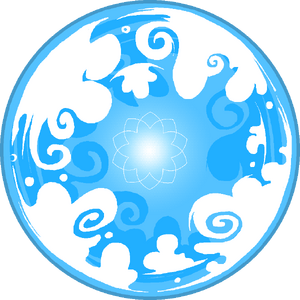 Skaia is a body in the center of the Incipisphere, surrounding the Battlefield inside, whose protection it is also charged with; the name Skaia is sometimes used to refer to both of these bodies as a unit.

Skaia is a portmanteau of sky+gaia, reflecting its nature as both a sky and a planet, Gaia being an Ancient Greek name for the Earth personified. This could also allude to Gaia and her mythological husband Uranus, personification of the sky, whose union produced the first generation of Ancient Greek gods the Titans. Among the Titans was Cronus, a god of time who overthrew his parents.

A Skaian gate or gates are also mentioned in Homer's Iliad, possibly inspiring Skaia's relationship with The Seven Gates.

Skaia has a blue surface scattered with white cloud cover. It serves a similar role to a star in the center of a star system, though thanks to its appearance it can also be seen as a sort of spherical sky to all the planets in the Incipisphere. Andrew Hussie describes it as “a big ball of pure sky [...] You look UP at it, from a place like Prospit.”[1]

- a “well of potential from which every conceivable possibility arises”

, which gives Skaia a sort of knowledge or intelligence of his own; seemingly shared across all instances of Skaia across all sessions, with Skaia only ever being referred to in the singular. Skaia uses its “preemptive all-knowing”

and “comprehensive "knowledge" of its own fate”

for the sessions in which it is involved; as a force of creation, these plans tend to oppose those of the Horrorterrors

, though the two parties may sometimes strike a deal with each other

, especially during an eclipse in which Prospit's moon passes through Skaia's surface and is cast in a variety of “CLOUD MIRAGES”

, and some are incapable of viewing Skaia's knowledge at all

, which Hussie suggests is a deliberate choice by Skaia to “[deny] the right to have any visions of the future” to its enemies.[2]

, down to the amount of prototyping towers that appear on Prospit and Derse, it is “a very passive entity”

that “only "knows" and "sees," but it never quite "acts."”; its ability to physically affect the temporal world is limited entirely to its ability to create defense portals, redirecting the Veil's meteoric Reckoning from the Battlefield to its only other option

, the planet of the session's origin.

With the temporal energy provided by the scratch, Skaia is able to change the destination times of some of its defense portals, creating an offshoot, post-scratch timeline by sending certain "“important meteors”

", such as those carrying the young heroes from the ectobiology lab, to different years. As the “vast majority of the destructive onslaught”

of meteors never showed up in Earth's post-scratch timeline, it is unclear if the majority of them were also moved to different times in Earth's history, or if Skaia also somehow has the ability to stop some meteors from reaching Earth at all.

After the defeat of the Black King on the Battlefield, grist rigs

toward Skaia, preparing for the Genesis Frog tadpole to be launched upward from the Forge. Once the Genesis Frog has grown to full size inside, Skaia takes on a more watery appearance so as to nurture the frog inside, with giant lily pads floating on its surface (though similar lily pads are also present during the fight with the King

). After all this, a dark grey lilypad-shaped platform appears in Skaia orbit, from which the victorious heroes access the door to the new universe inside their frog.

After Jack Noir's attack on the trolls' session, Skaia remained intact, though its surface was muddied with the remains of the slaughtered Bilious Slick.

Even before any of the Homestuck Kids play Sburb, Jade Harley is able to visit Prospit during her dreams and gain an understanding of future events (much to the confusion of her friends) using the Skaian clouds.

When the kids orchestrated the scratch, past Skaia manipulated the defense gates so that the meteors bearing the kids and their guardians would land in different places and time periods, so that each kid-guardian pair would be switched (John/Nanna, Rose/Mom, Dave/Bro, Jade/Grandpa). Rose states that Roxy and Dirk living in "the future" instead of the time period Rose and Dave lived in was one of Skaia's "peculiar whims".

In Calliope's and Caliborn's session Skaia has started to fill up with dark grey storm clouds, and is completely filled with them by the time Jack kills Calliope's dream self. This may be related to their game being a dead session, but it remains unaddressed. Curiously, in this session Prospitans wear black clothes, and Dersites wear white, an inversion of the sessions observed so far. This could tie in to Calliope and Caliborn's Yin-Yang theme.

When Caliborn makes The Choice to take the path of the conqueror, Skaia becomes darker and heavier, turning into a solid sphere before exploding in an event known as the First Break. Fifteen new planets emerge from the blast and scatter around the Medium while the remaining Skaian matter collapses into a black hole at the center of the incipisphere. Three of the planets are swallowed by the black hole, leaving only twelve. As part of his quest, Caliborn uses powerful bombs to push each planet into the black hole, "sinking" them.

Skaia as viewed from space.

Skaia during the scratch, displaying the time and space symbols.