Doubles her "Y"s, speaks in a Western accent.

Dapper Dueling ♫
Skylla Koriga is a young Alternian troll living in Outglut during the time period of Hiveswap and Hiveswap Friendsim. Skylla was first revealed during the Hiveswap Troll Call event alongside Diemen Xicali on December 6th, 2017. Her bullet points were "vegetarian, somehow", "mouth twig passed down from her lusus's mouth", and "what IS tarnation?" Skylla was featured alongside Bronya Ursama in Hiveswap Friendship Simulator: Volume Three. She was designed by Poinko. Her bullet points were altered as from December 2018 to "Lusus Wrangler", "She's why you don't mess with a rustblood's ranch" and "Grubcakes, anyone?".

Skylla may simply come from the similar name "Skyla". Her name may also come from "Scylla", which is the name of a sea monster in Greek mythology. Skylla in Swedish translates to "blame". If spoken with Spanish pronunciation, her name will sound similar to "Skaia". Koriga translates roughly from Uzbek into cousin.

Skylla is a bronzeblooded ranch owner living in the rural outskirts of town, with only Ladyy for company as visitors are rare. Before meeting the MSPA Reader in Hiveswap Friendsim: Vol. 3, she had to deal with lusus thieves every now and then.

In the events of Hiveswap Friendsim: Vol. 3, she helps the player into her hive, stating that the player was lucky it wasn't beyond dawn. She offers the player some food, and begins chatting with the player. Abruptly, several lusus thieves launch an attack, Skylla rushing outside to protect her lusus, Ladyy.

In Hiveswap Friendship Simulator: Volume Seven, she appears in Konyyl Okimaw's route, asking her to go after the lusus thieves for the sake of the other trolls' lusii. Her screename is apparently countryyladyy453. The two argue with each other and almost get into a fight before Konyyl agrees to take the job, though she doesn't allow Skylla to come with her. She also appears in Volume Eighteen at the party in bother versions.

If the player decides to help Skylla, they rush out into the sun with her. MSPA Reader observes that there are about a dozen bandits, all in dark padded outfits that are described as a cross between a hazmat suit and a swat uniform. All of them are carrying large laser guns, and just as both Skylla and the protagonist arrive, one of the bandits shoot it at the player, who narrowly dodges. Skylla throws herself into battle, doing the majority of the fighting while the player stand back and watches in awe, except for one point in the fight where the player manages to punch of of the bandits, throwing them off their rythm so Skylla could attack. Eventually they are reminded by Skylla that their priority is to rescue Ladyy, and the player assists the lusus in freeing itself. Ladyy jumps into the fray, defeating some of the remaining bandits and causing the rest to flee. MSPA reader is reminded that they've taken serious injuries, and along with the Alternian Sun, the damage causes them to begin fainting.

Skylla expresses concern, and calls the player her new best friend. With the help of Ladyy, Skylla and MSPA Reader stumble back to her hive. When they enter, the player is unable to see anything except for small, dim patches of the screen with Skylla's face and Ladyy's ear in them. This is presumably because MSPA Reader does not have dark vision like trolls do. Noticing that the player also has a bad case of sunrash from being exposed to the deadly sun, Skylla invites the player into her recuperacoon with her. The player is hesitant because doing so requires them to take their clothes off, but after some encouragement and assuring the protagonist that it is not a romantic solicitation of any kind, MSPA reader eventually does get into the recuperacoon, and the player sees the victory screen.

If the player decides to stop Skylla from flinging herself out in the harsh Alternian sunlight, Skylla will fight against you for a few moments before slumping in defeat. Ladyy is taken captive, and Skylla is heartbroken. After the sun goes down, the player and Skylla head outside to inspect the damage. Skylla soon receives a ransom demand from the bandits, and is visibly distressed when she can never hope to afford the ridiculous amount stated. Even though she accepts the tragedy that has befallen her, she tells the player that friendship would never work out between them. Feeling guilty, the player leaves her standing by an empty paddock.

If the player refuses to go to the shimmer, the game over screen will appear showing the sunburnt corpse of the player.

Skylla appears in Hiveswap Act 2 in the rust car. She originally mistakes Joey for a luscii and tells Joey and Xefros that her lusus is sick and they offer to try and find medicine for her.

Skylla is a friendly, compassionate troll; the only troll so far to give the player a proper meal upon bringing the player into her hive. While she might have a cheerful disposition towards most things in life, she is well aware that she can never really amount to anything as a bronzeblood in Alternia. Like Xefros, she seems resigned to the fact that her life as a lowblood will be filled with hardship and tragedy.

She is very open and accomodating, despite the player being an alien. Skylla outright states that she should get used to the sight of aliens anyway, and reassures the player that she wouldn't call the drones. After the player helps her defeat the bandits, she invites the player into her recuperacoon to speed up the process of recovering from nasty sunburns.

Skylla is noted to be taller than any of the trolls the player character has met, and is also mentioned to be quite attractive. She is not shown using any sort of psychic ability like that of fellow bronzeblood Tavros, but is more than capable of fending off enemies with her fists and the butt of a gun. She seems to find the prospect of fighting bandits exciting to some extent, as her character sprite is depicted with a smile at some point.

Skylla's lusus is a giant Rough Collie named Ladyy, and the two of them often fight off lusus thieves together. Skylla is very attached to her lusus, and is more than willing to put herself in harm's way to make sure Ladyy is safe. When Ladyy is taken away from Skylla in the bad ending, Skylla becomes despondent and miserable, lamenting the fact that she could never say goodbye to Ladyy.

In Hiveswap Friendsim: Vol 7, she asks Konyyl to go after the lusus theives for her. The two argue with each other about it before Konyyl agrees, and Skylla's dialogue suggests some possible black feelings. While Konyyl doesn't let Skylla come with her, it could be because she didn't want her to see her kill the lusus thieves. Konyyl also blushes at the player's suggestion that she hates Skylla.

Skylla seems to be very close with her lusus and is very upset and worried over her illness.

Skylla is very kind to Joey and is extremely touched by her offer to try and find medicine for Ladyy.

A picture of younger Skylla and Ladyy

Skylla at the party in Friendsim Vol. 18 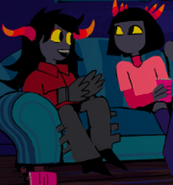 Skylla at the party ver. 2 in Friendsim Vol. 18