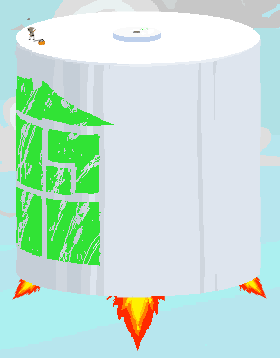 The Skyship Base is John's command station: a dark, abandoned facility discovered by the Wayward Vagabond in a desert that once was the location of Rose Lalonde's House. It appears to be split into three separate rooms, which can be rotated around and accessed by icons on an LCD screen.

The base eventually launches into the air and flies westward until it runs out of power and lands on an island in the Pacific Ocean. It is destroyed when the universe ends thanks to Bec Noir's Red Miles attack. 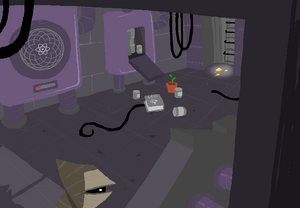 The first room the Vagabond sees. Its icon is the house-like Sburb logo.

The most notable feature of the base is a Computer Terminal that allows the user to communicate and, to an extent, command Sburb players (or at least John) once they are in The Medium.

A cabinet-like machine in the base contains many different canned goods, a houseplant, and a book on Human Etiquette. The abundance of canned food suggests that the base's former occupants, assuming it ever had any, stocked up on easily preserved meals, most likely predicting they would need them during a massive cataclysm. However, a can opener is no where to be found. As a result of the cans being tightly sealed, they are used to construct the imaginary Can Town.

The other end of the room contains a similar storage compartment, which is full of TaB cola. Lying on the floor nearby is an assortment of seemingly unrelated objects: a box of Crayola crayons chalk, a nugget of uranium (which is quickly devoured), a living firefly preserved in amber, and a yellow container of motor oil. All these items are moved away or used to expand Can Town. They are presumed to be each player's Associated Item.

After seeing a large power cell with a diagram of an atom on it, the Vagabond speculates that the base runs on nuclear power. After the Base's flight, the gauge on the power cell reads empty.

The Vagabond has covered the walls of the base in chalk drawings which bear an uncanny resemblance to the Incipisphere's cosmology.

The second room the Vagabond sees. Its icon is a "triangley fractal," similar to the one on the base of the Alchemiter.

This room contains a control panel a laser-like device pointing at a platform with a fractal pattern on it. Together these devices are known as the Appearifier, which has the power to teleport "appearify" any object from anywhere or anytime on Earth to it.

The screen in this room showing Earth

has a faint spiral in the background. The significance, if any, of this is unknown.

This room is locked until a stray Rocket launched by the Aimless Renegade tears a hole in the wall. Its icon is the "funny-looking spirograph" shape of the Seven Gates. This icon is found on the floor, on a large blue button, and twice beside a dial with a picture of a frog.

During the events of [S] Cascade, it is revealed that when the base is powered, one of the two settings on the dial will open a trans-universal rift to the Ultimate Reward platform in the trolls' incipisphere (the session 'outside the universe', the universe represented with a frog), explaining how Bec Noir arrived there. The other setting opens a rift to the same platform 'inside the universe', the Kids' session. It is unknown where this transportalizer would lead if an Ultimate Reward platform is not present in the relevant session.

The skyship base is located in the very spot that was formerly occupied by Rose's mansion - the Zazzerpan statue's arm and crystal ball are seen in the sand beside it. The facility itself is the "cork" of a massive bottle, which is mostly buried under the desert, and is related to the Cruxite Bottle that Rose smashes to escape certain doom and transport herself to The Medium. The rest of the bottle is never mentioned but is seen in [S] Enter.