For the album, see Squiddles!.

Squiddles is a television program in Homestuck that chronicles the adventures of a group of friendly squids; episodes revolved around themes of friendship, teamwork and tickle fights. The Squiddles also took care to avoid the horrors of the Murky Brineswallows and the fishing-nets of Skipper Plumbthroat. Fans could purchase a variety of merchandise, ranging from shirts to plush companions. The stuffed animals were equipped with magnets that drew them to each other. The show ran from 2000 to 2004 and was poorly received, if the 2.6/10 rating on the topatoco page was any indication. Rose Lalonde was never very involved with the show but purchased a shirt and re-purposed it to fit her tastes, which is quite fitting considering that the Squiddles are, in part, a subconscious reimagining of the Horrorterrors and the other monsters in the Furthest Ring.

In the End of Act 4 animation

, a brief interlude is shown featuring the Squiddles apparently engaged in some sort of video game, tickling and tangling the Skipper into a group hug so marvelous that it can cause spontaneous (but harmless) friendship aneurysms.

We, the other kind of fans, can purchase a fan-created album containing a full version of the song in that animation, and we can purchase a shirt (in white or mauve) which may or may not be re-purposed to fit our tastes. Or even purchase one of the marvelous real life squiddle plushes made by the amazing eyes5. Well at least we could have...if it hadn't been for the fact that they were sold out in under one hour. 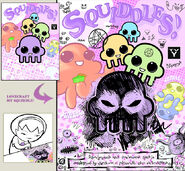 A window resembling a squiddle
Add a photo to this gallery

Retrieved from "https://mspaintadventures.fandom.com/wiki/Squiddles?oldid=239489"
Community content is available under CC-BY-SA unless otherwise noted.