Talks in ALL CAPS. No punctuation.

IIYWASWIWTBOTSA4A­ATWUOTDTMIHCIMFH ♫
Stelsa Sezyat is a young Alternian troll living in Outglut during the time period of Hiveswap and Hiveswap Friendsim. Stelsa was first revealed during the Hiveswap Troll Call event alongside Fozzer Velyes on February 7, 2018. Her bullet points were "no accounting for taste", "troll jewish" and "wait, what did you mean, 'texting your sister'". Stelsa was featured alongside Boldir Lamati in Hiveswap Friendship Simulator: Volume Thirteen. She was designed by Shelby Cragg. Her bullet points altered as from December 6, 2018 to "No time to talk darling she's incredibly busy make an appointment she'll pencil you in", "Files for her files" and "Sensible heels".

Her first name could be derived from the word "stealth". Her last name is a reference to the Egyptian goddess of math and writing, Seshat.

Stelsa is a tealblood who lives in an apartment complex in Outglut. She is an Auditerrorizer-in-training and is very forward about her business plans, wanting to ace meetings in the hopes of becoming the best in her line of work.

If the player chooses to try and enter one of the buildings, they will notice Stelsa jogging their way. As the teal is busy talking on the phone, arguing about her cancelled salon appointment with Jaromy (an unknown troll) she doesn't notice the player at first. Only when she's right at the door does she notice the player waiting there, and having heard about the player through her matesprit Tyzias, Stelsa is already aware of the player and is delighted about the prospect of meeting them. After doing away with the usual introductions, she invites them in enthusiastically. Stelsa chats with the player for a bit before heading off to take a shower, leaving the player alone for a few moments. When she returns, she informs the player of her current predicament. Should the player offer to be her beautician for the day, Stelsa happily leads you into another room so the player can get started.

If the player decides to style her hair, Stelsa comments that it's nice to be the one cared for. The player talks about Tyzias' plans for rebellion, thinking that it would be a suitable conversation topic with Stelsa. Unfortunately, Stelsa becomes very nervous and quickly denies knowing anything of the sort. Stelsa is pleased with her new hairdo, and tentatively talks about several problems she's facing in her relationship (though she masks it as someone else's problem). Even though the player would rather not get too involved in relationship drama, they advise Stelsa to perhaps talk with Tyzias to resolve the tension between them. Touched with the player's response, Stelsa gives the player a hug for being a good friend, and apparently, become her moirail.

If the player decides to run back to the scuttlebuggy, the acidic rain will be too hard to dodge and too toxic for delicate human skin to withstand. The player will be reduced to a skeleton on the road, not encountering Stelsa at all.

Should the player suggest that the extra time could be used to prepare for the meeting, Stelsa will reveal that her client is Remele. The player quickly mentions that they are friends with the cerulean, prompting Stelsa to insist that the player accompany them to the meeting to increase the chances of success. While in the middle of debating the benefits of relaxing, Stelsa suddenly screams that the road up ahead is inaccessible due to road works. Panicking, the player blurts that they don't know how to drive the scuttlebuggy manually. Hissing curses, Stelsa switches the vehicle's settings while the player attempts to manoeuvre them out of harm's way. Due to a judgement error, the player sends the car careening right into a power line. Dishevelled and furious, Stelsa berates herself for ever trusting the player, then storms off without another word.

If the player decides that polishing Stelsa's horns would be a good idea, Stelsa will immediately ask what the player intends to do with a velvety strip of cloth. Upon hearing the player's reasons, Stelsa becomes quite uncomfortable with the implications. While she insists that it wasn't fair of her to expect the player to be familiar with the nuances associated with troll grooming habits, she throws the player out of her apartment regardless of her apparent understanding of the player's misguided motives.

She makes a brief appearance in Hiveswap Friendsim: Vol. 17, where the player comes to her so that they could carve out a workout routine (the player wanted to get toned in order to impress Nihkee). Stelsa is initially annoyed with the player for showing up unannounced, but regains her cheery disposition and invites them inside for dinner. After hearing about the player's current dilemma, Stelsa happily agrees to help them out as she had been meaning to find someone to exercise with. She and the player proceed to meet up for workout routines for the next few weeks until the player has gained enough muscle, though the player ultimately decides not to go back to Nihkee's for fear of a potentially disastrous outcome. Stelsa and Tyzias then have a meal with the player while they try their best not to focus on a particularly frightening image of Nihkeeborg.

In Hiveswap Act 2 Stelsa appears in the teal and jade train car. After over hearing the jades arguing she offers her services as an auditor to them which Bronya refuses. Marvus then enters the car and Tyzias suggest they try out her defense system with Marvus as His Honorable Tyranny. Stelsa acts as the prosecutor of the case prosecuting that Daraya is guilty of stealing the jade blood book "Fresh Teeth." In either route the trial can go Daraya is found innocent and Stelsa reevaluate some of her feelings about Tyzias' system.

Stelsa is an ambitious and forthcoming business person, with an internship as an auditerroriser under the Alternian Government. Upon meeting the player, she offers the player her business card and services, indicating that she is quick to take every opportunity available to her. She fully intends to become the best in her field, which is why she takes on numerous side-jobs to gain new experiences. This is the main reason why she's going all-out to impress her potential client—in this case, Remele. Her desire to succeed keeps her extremely busy, which is reflected in her tendencies of overworking herself. When she admits that she believes reading Remele's webcomic is an irresponsible and flippant way to spend her time (despite enjoying it), the player has a hard time encouraging her to allow herself time to rest and relax as Stelsa misunderstood the player. Overall, Stelsa seems to be the sort that places ambition over comfort.

She is extremely confident and self-assured when it comes to her work and schedule, though there are times where she loses her composure. This is best illustrated when the player openly speaks about Tyzias' insurgent views on Alternian society, Stelsa quickly dismisses the player's insinuation that Tyzias is involved in anything treasonous. When the player probes further, Stelsa flies off the handle and becomes near hysterical in demeanor in her attempt to defend herself. However, should the player back off, Stelsa simmers down quickly enough.

Apart from that, Stelsa appears to be quite friendly to those she meets. Even though she'd only learned about the player from Tyzias, Stelsa doesn't mind offering the player a drink and a snack right after inviting them into her hive. She also has a tendency to refer to the player as 'darling' every now and then, hinting that she's rather affectionate in nature.

Stelsa is noted to speak in a rushed manner, making it hard for others to get a word in edgewise. The player describes the entire experience as being struck by a verbal freight train, and is quite amazed that Stelsa is able to say so much without drawing breath or pausing in between sentences. In addition, Stelsa has toned arms; results from exercising often (there are dumbbells in her living room and a stepper tucked away in a corner).

While Stelsa is aware of her matesprit's revolutionary leanings, her opinion conflicts with that of her girlfriend's; Stelsa believes that the hemospectrum and oppressive system are needed to maintain control or order in Alternian society, seeing it to be better than complete societal breakdown brought on by uprising or rebellion. Any mention of Tyzias' ideas makes Stelsa become defensive and noticeably cautious, and she strongly denies that the two of them are anything but law-abiding subjects of the empire. Her fear of potential consequences is clear in her tense posture and near hysterical voice as she stresses her ignorance on the matter, repeatedly reassuring the player that she has no clue what they are referring to. Even so, the player notices that Tyzias appears to deliberately leave her items (containing revolutionary ideas) in places where Stelsa can't ignore them, perhaps in a bid for Stelsa to acknowledge the biased power play and not pretend that everything is alright. Despite Stelsa agreeing to take the player's advice to practice open communicate with Tyzias, Stelsa still firmly believes that Tyzias is merely going through a rebellious phase that she has yet to outgrow.

When Stelsa makes her second appearance in Hiveswap Friendsim: Vol. 17, she is shown interacting just fine with Tyzias (who was at her place studying). When she accidentally kicks the player out right after saying that they could stay for dinner, Tyzias reminds her that the player is a guest, snickering all the while. Even so, Tyzias explains to the player that being schoolfed changes one's perception and manner of handling things, which sheds light on why Stelsa constantly feels the urge to pencil down details and appointments (even when the person concerned is already at the door). In short, Stelsa and Tyzias are supportive of one another and are more than happy to help the player in their time of need.

Stelsa and Tyzias seem to be having some relationship issues due to Tyzias' radical ideas that Stelsa is worried about. Tyzias also can be somewhat rude to Stelsa to "ruffle her feathers" because is keeps things "interesting." It is unclear how Stelsa feels about this. However, they are shown to care about each other a lot with Stelsa outright saying she loves Tyzias. They also flirt and make sexual innuendos towards each other in the no deaths rout of the trial and seem to really enjoy doing the trial together. 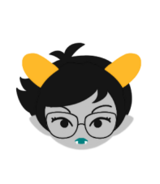 Stelsa's sprite from the trial