Dave Strider
Bro
Dave's house is a location in Homestuck, the residence of Dave Strider and his Bro. Unique among the protagonists, the Striders live in an apartment on the top floor of a skyscraper in the middle of a large city, rather than a singular house like John Egbert's typical suburban home or Rose Lalonde's isolated mansion or Jade Harley's strange tower house on an island. Due to Bro's obsessive hobby, the home is filled with increasingly disturbing puppets. Many appliances in the household tend to not to serve any purpose other than storage for puppets or - more frighteningly - weapons.

So far, not much is known about the tower itself; all that's been seen of it is Dave's room, a bathroom, the living room and kitchen, and the exterior, where an air conditioning unit and an antenna are seen on the roof.

Above the apartment is a crawlspace (accessed through a hatch in the ceiling of the living room) that Bro uses when being stealthy.

The city around Dave's apartment is being slowly demolished by a steady stream of meteorites. It appears one of these meteorites has crashed into the air conditioning unit on the roof. What this meteorite has done to the apartment, if anything, is as of yet unknown.

When it was transferred to The Medium, only Dave's floor, the top apartment, was transported, although it remained supported in the air with metal struts, much like the other structures on Dave's planet, the Land of Heat and Clockwork. It has since been built up by Jade Harley.

The living room in Dave's apartment. It contains a flat-screen TV, video game consoles, a sound system, a futon where Dave's Bro sleeps, Bro's rad and extremely expensive ninja swords, a desk with Bro's computer on it, a couple samplers, and a chest for storing Lil Cal for safe transportation.

Like most other rooms in the house, the living room is littered with puppets and posters of such. Many of the puppets here, however, are rather more risque than they are hip hop; almost all of them are nude - except for the occasional leather thong - and several of the pictures feature pixelated areas.

The living room floor also has many issues of GameBro on it, which is odd since Dave agrees with John that the magazine is worthless and even goes so far as to write satirical reviews of it.

The living room has a small kitchen area in one corner with a microwave (full of puppets, naturally), a blender, a sink, and a fridge (complete with child-made art). More alarmingly, a myriad of ninja weaponry and fireworks are scattered about the counter top.

The bathroom in Dave's house. It's rather narrow and cramped but has just enough room to hold a sink, toilet, mirror, and stand-up shower. Bro casually uses the shower as extra storage space for his many puppets. Dave removes them before pissing in the shower, since his toilet has been relocated to his bedroom by Jade.

The toilet was accidentally pulled out by Jade who was attempting to retrieve a towel she had dropped in there.

The roof on Dave's house was the location of Dave's first big fight with his Bro. This is the location of Dave's Alchemiter. After Jade started to build on Dave's roof the only place still visible is where the Alchemiter resides, and the stairwell leading back down to Dave's living room. There was a radio tower on Dave's roof that became the nest of the Seppucrowsprite. Dave tried to climb the tower to crack the egg that would take him to The Medium, not knowing that the egg only needed time to hatch.

It is possible that the "large city" in question is Houston, Texas if the second largest meteor strike on the map of meteor strikes

that Rose finds in the Skaianet Laboratory corresponds to the meteor headed for Dave's apartment. This was confirmed in Jake: Retrieve arms from floor, post-haste!

The large city Dave is shown to live in

Dirk Strider
Bro
The skyscraper containing the apartment of the post-scratch Striders, Dirk Strider and his Bro. It is the same building where Dave and his Bro live in the pre-scratch universe, and as such located in Houston, Texas. At least in 2011. In the not too distant future (around the year 2400, more specifically) it is still in the same location, however Houston has been severely flooded and his home is the only one in sight. The lower levels of the skyscraper have been reduced to its metal construction, similar to Dave's home once it entered the Medium. 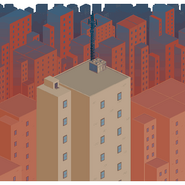 After entering the Medium
Community content is available under CC-BY-SA unless otherwise noted.
Advertisement